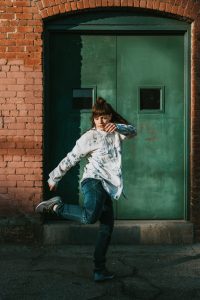 Amy O’Neal is a hybrid dancer, choreographer and dance educator. A sought-after artist for 20 years, she teaches and performs nationally and internationally and choreographs for live performance, dance film, music video and virtual reality. From 2000 to 2010, along with musician and composer Zeke Keeble, O’Neal co-directed locust, an experimental multidisciplinary video, music, and contemporary dance company. Inspired by hip-hop culture and experimental cinema, locust‘s work created social commentary with humor and heavy beats. From 2010 until now, she has shifted to creating experimental dance work centering people and practices of hip-hop and house culture while directly addressing race, gender and the sampling nature of innovation. She premiered her first evening-length solo in 2012 where she examined her influences, questioned her relationship to Blackness as a white woman, and paid homage to her teachers and dance heroes. As a practicing guest of Black dance culture, she has participated in experimental and all-styles battles, co-organized and co-produced Seattle House Dance Project, and developed hip-hop curriculum for the University of Washington. Her passion and research meet at the intersection of the hip-hop, house and contemporary dance communities. Within this intersection she explores the complex differences, nuances and layers of hybridized movement vocabularies. For example, in her eighth evening-length work, Opposing Forces, O’Neal and five Seattle-based B-Boys explored fears of feminine qualities in our culture through the hyper-masculine form of Breaking. Opposing Forces toured from 2014 to 2017, and an award-winning documentary about the show called How it Feels premiered in 2019. City Arts Magazine wrote, “O’Neal synthesizes complex themes with a cohesive, penetrating aesthetic. Her latest work transcends disciplines and boundaries. It is a bridge between worlds, a translator for opposing points of view, a force for good.”

O’Neal is a grantee of Creative Capital, National Performance Network, National Dance Project, Mid Atlantic Arts Foundation, Foundation for Contemporary Art and 4 Culture. She is a two-time Artist Trust Fellow, DanceWEB Vienna scholar and Herb Alpert Award nominee with a BFA from Cornish College of the Arts, where she was awarded the first Distinguished Alumni Award in 2014. While at Cornish, she danced and toured with the Pat Graney Company from 1998 to 2001. O’Neal has been an Artist in Residence at Bates Dance Festival, Headlands Center for the Arts, the US/Japan Choreographer’s Exchange and Velocity Dance Center. Since 2001, she has worked both on stage and screen with musician/comedian, Reggie Watts, band leader for “Late Late Show with James Corden.” She has improvised with Watts in NYC comedy clubs, toured together in original stage shows, choreographed his iconic 2010 Comedy Central video F…, S… Stack, and in 24 hours, created an evening-length dance/music show with him. Along with NYC based artist Ani Taj, she co-choreographed Runnin’, a virtual reality music video for Watt’s Wajatta project with electronic music artist John Tejada. Runnin’ premiered at the New Frontier VR showcase at Sundance Film Festival and won Best Interactive at SXSW in 2019.  Also in 2019, she choreographed a virtual reality project for Procter & Gamble promoting more diversity in productions for the advertising and film industries called Look Again which premiered at Cannes Lions Festival in France.

After 20 years in Seattle, O’Neal relocated to Los Angeles in 2016 and started The Rhythm Assembly, a freestyle techniques class merging the social and exploratory natures of hip-hop and contemporary dance at Ryan Heffington’s studio, The Sweat Spot. She joined the faculty of the University of Southern California Glorya Kaufman School of Dance in 2018 where she teaches hip-hop, house and improvisation techniques, and lectures on Black social dance history and practices. She feels the most at peace when she can embody her full experience as a human and is passionate about creating space for others to do the same.