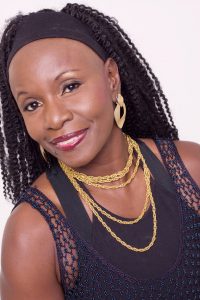 Anindo (Sarah) Marshall began her musical and dance career in her homeland of Kenya as a vocalist, dancer and percussionist. She enjoyed a successful solo career in Europe as a vocalist, signing a recording contract with EMI Spain and becoming known as Kenya’s singing sensation. She has performed with Babatunde Olatunji and Mickey Hart of the Grateful Dead, among others.

An accomplished musician, Marshall teaches percussion from Africa and Latin America and has studied with some of the world’s finest percussionists including Babatude Olatunji, Mamadi Keita, Mor Thiam, Lamin Dido Camara and Karamba Diabate. Her study of African rhythms compelled her to further her studies of West African dance under the tutelage of  Kimoko Samo (former artistic director of Les Ballet African of Guinea West Africa), Marie Basse and countless others. Marshall also teaches music in Montrose, California where she runs the school choir, band and flag team.