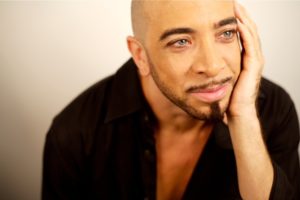 Dwight Rhoden has established a remarkably wide-ranging career, earning distinction from The New York Times as “one of the most sought out choreographers of the day.”

A native of Dayton, Ohio, who began dancing at age 17, Rhoden has performed with Dayton Contemporary Dance Company, Les Ballet Jazz De Montreal and as a principal dancer with Alvin Ailey American Dance Theater. As a performer, he has appeared in numerous television specials, documentaries and commercials throughout the United States, Canada and Europe and has been a featured performer on many PBS Great Performances specials.

In 1994, Rhoden, along with Desmond Richardson, founded Complexions Contemporary Ballet. Together they have brought their unique brand of contemporary dance to the world for over two decades. CCB is widely considered “America’s Original Multicultural Contemporary Ballet Company.” Complexions is celebrated for its pioneering spirit, and the building of a universal brand that continues to challenge traditional ideas, and redefine possibilities in the dance arena. Under Rhoden’s direction, Complexions has become a dance institution that is much in demand. CCB has led the way in contemporary ballet in America, by removing traditional boundaries, and celebrating the beauty of differences – through courageous, innovative and cutting edge programming. Over the years, Complexions has remained consistent in delivering a profound passion for diversity that has framed its vision and become its hallmark.

“Musicality, innovation, purpose, consistency, a brilliant use of stage space and the ability to tell a story — all these qualities make him (Rhoden) one of today’s elect choreographers.” – The Los Angeles Times

Rhoden has also directed and choreographed for TV, film, theater and live performances including So You Think You Can Dance, E! Entertainment’s “Tribute to Style,” Amici, Cirque Du Soleil’s Zumanity, and choreographed and appeared in the feature film One Last Dance.

Rhoden was also commissioned to create a work for the centennial celebration of renowned collage artist Romare Bearden, choreographed a ballet for Diana Vishneva’s Beauty In Motion, and has directed and choreographed The Great Gatsby ballet for soloists of the Mariinsky, Ukrainian National Ballet, and soloists from the United States.

Widely known as “a dancer’s choreographer,” Rhoden has worked with, coached and created for some of the most diverse artists spanning the worlds of ballet and contemporary dance including legendary dance artists Carmen De Lavallade, Misty Copeland, Wendy Whelan, Maria Kowroski, Diana Vishneva, Desmond Richardson, Sandra Brown, Jodie Gates and Gus Solomons, to name a few.

Rhoden has served as Artist in Residence at universities around the United States including USC Glorya Kaufman School of Dance, New York University, Juilliard, UC Irvine, Skidmore College, The Boston Conservatory and The University of Mississippi, where his 2004 Racial Reconciliation Project was credited as a catalyst for dialogue in a community that had been historically divided.

Rhoden is a beneficiary recipient of various honors and awards including the New York Foundation for the Arts Award, and subsequent induction into the NYFA Hall of Fame, The Choo San Goh Award for Choreography and The Alvin Ailey Apex Award. Rhoden was nominated for a Benois De La Dance award for his libretto for The Great Gatsby ballet, and received an Honorary Doctorate degree from The Boston Conservatory in recognition of his extensive contributions to the field of dance. For more information, please visit dwightrhoden.com.