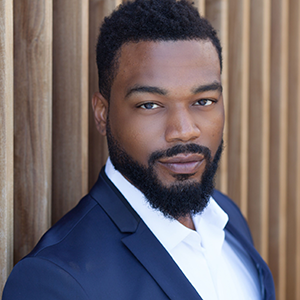 Grasan Kingbserry is a Daytime Emmy, Grammy, ACCA and Regional BroadwayWorld Award winning artist originally from Charlotte, NC. After receiving a BFA from The Juilliard School, he went on to appear in 11 Broadway productions. He was featured in the 2018 Tony Award best revival Once On This Island. He was a part of workshopping and developing the 2005 original Broadway cast as well as the 2015 Tony, Grammy, and Emmy winning revival of The Color Purple.

Other Broadway shows include: Motown, Nice Work If You Can Get It, Leap of Faith, On A Clear Day You Can See Forever, Dirty Rotten Scoundrels, Finian’s Rainbow, Catch Me If You Can, and Aida. Regional theater roles include: Something Rotten! (William Shakespeare); Musical Theatre West; In The Heights (Benny); Music Theatre of Wichita (2019 Regional BroadwayWorld Award), Annie (H. Morgenthau); Hollywood Bowl, One Night In Miami (Sam Cooke); CenterStage, Dreamgirls (Curtis); North Shore.

Aside from his fruitful career as a performer, Kingsberry is an international teacher and mentor, and currently serves as a Lecturer in Dance for Musical Theater at USC Kaufman. He is also the Co-founder of {subject to change}, a gender-neutral streetwear clothing brand, and the Co-owner of a basenji named Kayode.