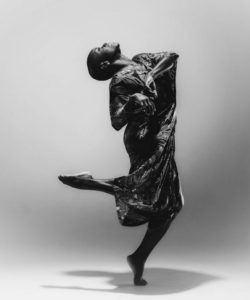 Hope Boykin is a choreographer, educator and former member of Alvin Ailey American Dance Theater. Performing professionally for over two decades, she has traveled the world and learned many lessons, which she never hesitates to use as food and fuel for her performances. As a result, Boykin has garnered many awards and honors, including a much-acclaimed New York Dance and Performance Award (Bessie).

Born and raised in Durham, North Carolina, Boykin is a three-time recipient of the American Dance Festival’s Young Tuition Scholarship. She attended Howard University in Washington, D.C. before moving to New York City to study at The Ailey School. Boykin worked as assistant to choreographers Milton Myers and the late Talley Beatty and was an original member of Complexions Contemporary Ballet. She danced for many years with Philadanco, The Philadelphia Dance Company.

Boykin joined The Alvin Ailey American Dance Theater in 2000, where she performed her duties as a dancer as well as her work as an educator, mentor, speaker and choreographer until 2020. She has choreographed three works for the Company: Acceptance In Surrender (2005), in collaboration with fellow Ailey company members Abdur-Rahim Jackson and Matthew Rushing; Go in Grace (2008), for the Company’s 50th anniversary season with music by the award-winning singing group Sweet Honey in the Rock; and r-Evolution, Dream. (2016), inspired by the speeches and sermons of Dr. Martin Luther King, Jr., with original music by Ali Jackson. Recently, Boykin was selected as a 2019-2020 Urban Bush Women Choreographic Fellow and is also working in theater where she has choreographed for the Atlantic Theater’s Homecoming Queen, Public Theater’s Public Studio The Loophole and New York City Center’s Encores Off-Center Promenade.

Boykin strives to bring young, aspiring students to a healthy understanding and efficient methods of technical and artistic movement. As she shares her knowledge and expertise of the Horton Technique, classical and other modern, jazz and contemporary dance styles, she insists on an honest and positively driven atmosphere which allows her classes, coaching and studio time to be effective, exciting and memorable.

Boykin combines life’s greatest influences and personal experiences to construct, design, inform and display her ideas, all while continuing to build her vocabulary of movement – defining her voice and style. Many have been a vehicle to help her create and share new works, collaborate with composers, and hone her ‘Movement-Language’ as a dance-maker and choreographer. Working with Philadanco, University of The Arts, Dallas Black Dance Theatre, Minnesota Dance Theater, Ballet East, The Ailey School, The Alvin Ailey American Dance Theater and the company in her name, HopeBoykinDance, continues to bring confirmation that her voice is relevant and remains important within the dance world today.

In 2019, Boykin joined the faculty of the USC Glorya Kaufman School of Dance as an Artist in Residence for the 2019-2020 academic year. Find Boykin on Twitter and Instagram at hbdance and Facebook as HopeBoykinDance.