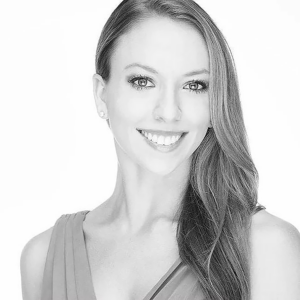 Born and raised in Ventura County, California, Molly Bogunovic began her ballet training at the age of seven under the direction of Clarissa Boeriu and Stanley Holden. At age 16, Bogunovic was accepted at the Rock School for Dance Education in Philadelphia as a resident student under full dance scholarship. In 2006, she joined Pennsylvania Ballet where she had the pleasure of working in their outreach program, Pennsylvania Ballet II, which brought dance to under-served communities in Philadelphia. While with the company, Bogunovic performed numerous corps and soloist roles in productions including George Balanchine’s The Nutcracker, Giselle, Sleeping Beauty, Christopher Wheeldon’s Carnival of the Animals, Matthew Neenan’s Carmina Burana, Peter Martin’s Fearful Symmetries, Balanchine Ballets, as well as the Fall Variation in Ben Stevenson’s Cinderella. While with Pennsylvania Ballet, Bogunovic also had the honor of touring in New York City at the New York City Centre, as well as the Kennedy Center in Washington, D.C.

In 2010, Bogunovic joined the Los Angeles Ballet where she has danced in countless productions including Balanchine’s Western Symphony, Serenade, La Valse, and Classical Ballets including Giselle, Swan Lake and La Sylphide, just to name a few. Bogunovic also had the opportunity to perform lead roles in new works from “So You Think You Can Dance?” choreographers, Stacey Tookey and Sonya Tayeh. In addition, she originated a soloist role in Christopher Stowell’s world premiere of Cipher.

Throughout her career and beyond, Bogunovic’s passion has always been teaching. She has coached many pre-professional dancers as well as taught for Los Angeles Ballet’s Community Outreach Program, “A Chance to Dance LA”and master classes throughout Southern California. Furthermore, Bogunovic is currently a writer, facilitator and panelist for the Spotlight Academy at The Music Center.