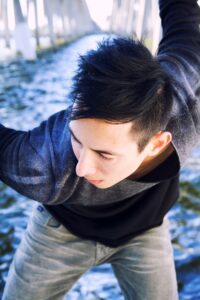 Originally from Cocoa Beach, Fla., Peter Chu is a distinguished artist who strives to push the physical bounds of dance. He began his training as a competitive gymnast, later nurturing his artistry at Dussich Dance Studio where his evolution into dance began. As a BFA student at The Juilliard School (under the direction of Benjamin Harkarvy), Chu was pushed further as a technical mover and began an explosive journey into choreography. Upon graduation, he was awarded the Hector Zaraspe Prize for Choreography.

Chu is a remarkable and multi-faceted artist. As a performer, he has danced with BJM Danse and EZdanza, as the lead in Christina Perri’s “Jar of Hearts” music video, in Celine Dion’s Vegas spectacular A New Day, and with Crystal Pite’s company Kidd Pivot.

In 2008, Chu formed a Las Vegas project-based company—chuthis. His multi-disciplinary dance company combines innovative lighting and sound with live contemporary movement. In 2018, chuthis. presented paper cuts in an empty bag at Zuiderstrandtheater in The Hague, Netherlands, as a part of the Shortcuts XL program, and was the company in residence at Perry-Mansfield Performing Arts School & Camp. A part of the mission of chuthis. is to provide movement education programs for the next generation of artists. Through the chuthis. Movement Intensive, an annual summer event, and chuthis. Moves, a two to three-day custom workshop for both national and international dance schools, the chuthis. team fosters technical/artistic development and mind/body familiarity while igniting an adventurous side of dance.

Chu has been an honored recipient of choreographic awards & commissions, including the Hector Zaraspe Prize, A.C.E. Capezio Award, & Hubbard Street Dance International Commission Project. He was also named a Blodgett Distinguished Artist by Harvard University for 2018. Additionally, Chu has served as the Rehearsal Director for Nederlands Dans Theater 2 and as a Guest Rehearsal Director for NDT1.

Most recently, Chu created an evening length work for Staatstheater Augsburg, Germany, and premiered creations for Paul Taylor Dance Company and his own company, chuthis.