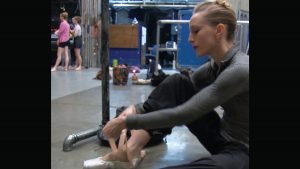 In conjunction with the upcoming performance of Some of a Thousand Words featuring Wendy Whelan, Brian Brooks, and Brooklyn Rider, USC Visions & Voices is thrilled to present a preview screening of the fascinating new documentary “Restless Creature: Wendy Whelan” at USC Kaufman. The screening will be followed by a Q&A with Wendy Whelan.

“Restless Creature” offers an intimate portrait of prima ballerina Wendy Whelan as she prepares to leave New York City Ballet after a record-setting three decades with the company. One of the modern era’s most acclaimed dancers, Whelan was a principal ballerina for NYCB and, over the course of her celebrated career, danced numerous ballets by George Balanchine and Jerome Robbins, as well as new works by modern choreographers like Christopher Wheeldon and& Alexei Ratmansky; many roles were made specifically for Whelan.

Free for USC students, staff and faculty only | RSVP is required

RSVP and details at Visions & Voices