Student Blog: Learning from and exploring with Lucky Plush 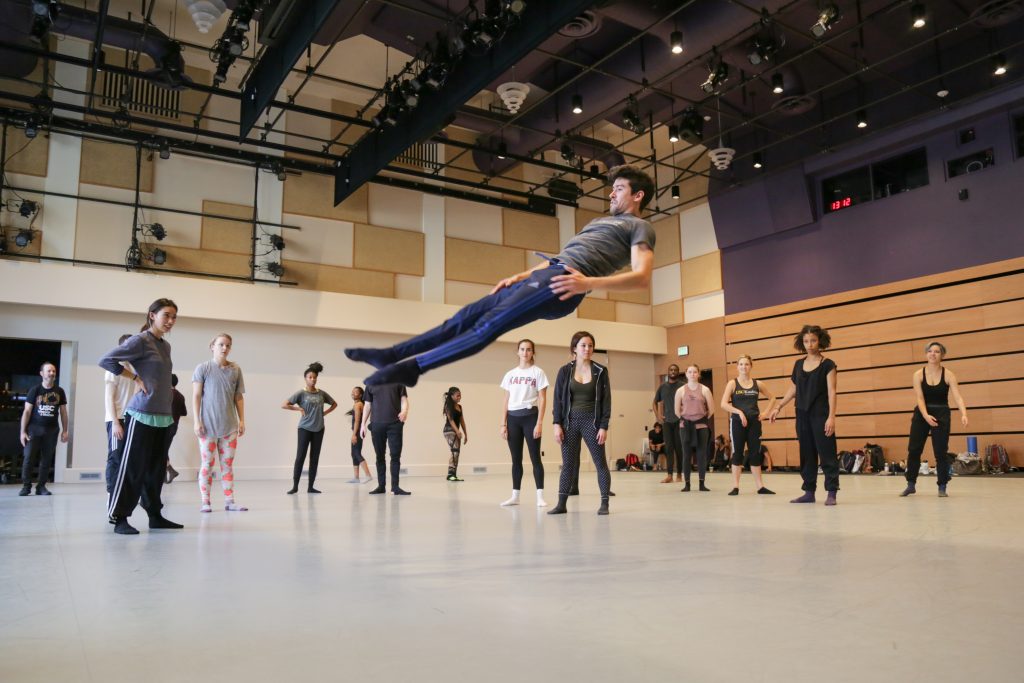 This past Tuesday we had the great honor of exploring with Lucky Plush Productions ensemble members Michel Rodriguez Cintra and Meghann Wilkinson. Working with them after having seen them perform the night before was very exciting because of the show’s high energy. As expected, they were very fun to work with. Their endless charisma and their solid experience provided a working environment flooded with creative energy. The theater MFAs from the School of Dramatic Arts, with whom we have never gotten the chance to share learning space, joined BFA dance majors for this workshop. They brought a different toolkit to the playground.

Watching Lucky Plush in “Trip the Light Fantastic: The Making of SuperStrip” at Bovard Auditorium on Monday night, including the Q&A session, and attending their master class on Tuesday, I learned that the notion of play is an integral part of their creative process. In the short master class on Tuesday, we played more than five improvisation games, all of which were immensely valuable. Although we were laughing, fooling around, and playing, the improvisation exercises were designed to create very complex and organic patterns with a judgement free approach.
The aspect of play was incredibly fun. We got to move around and interact with the theater MFAs while employing all the improvisational tools that we have gathered throughout our time here at USC Kaufman in a natural manner. It was really fun to make way for emotions to create motion, because as dancers we often sacrifice emotional intelligence for physical intelligence. In theater, however, it is the thought, feeling, or emotion that drives the action.
I loved exploring play with the Lucky Plush cast members, and want to integrate this into every day of my life. Playing brings out what could be described as passion. When a kid is determined to score in a soccer game, or when a dog is focused on fetching a stick, they are hyper-focused on a task; their entire energy is focused on the task at hand. This is why playing is such an integral part of education. While playing, judgment is placed on the second plane because fear of failure is not at the forefront–if you are having fun playing, losing or winning is not really important. Playful energy pushes passion to the forefront to create a focused working environment. This environment was exactly what Michel and Meghann built in the master class.
The improv games that we played were meaningful to me because I am very interested in the intersection of theater and dance, since both art forms are powerful mediums of communication. When you merge theater and choreography, you can create something that uses language everyone understands (words) and language intuition understands (movement). Often words do not embody what we truly want to say, so movement is more accurate to portray an uncoined word/symbol. On the opposite side of the spectrum, words are an effective means of communication when the creator wants to clearly communicate a message to the audience. The ability to use both means of communication and employ them strategically for communication with the audience enhances art’s capabilities. During the master class we researched both methods of communication.

Applying play to our every day

During this workshop, Meghann introduced us to a choreographic tool that we do not often encounter in our composition class; choreography that stems from the art of dramaturgy. We have had different improvisation and composition tools that stem from more geometrical, musical, and architectural concepts. However, we have not largely interacted with choreographic tools that stem from dramaturgy. My favorite exercise in this category was having a conversation with a body part. In this exercise Meghann would point out a body part and we had to pair up and have a conversation, moving only that body part to communicate. Elements such as speed, duration, space, and counterpoint (which we have explored in composition class) arose naturally from the emotional interaction between two beings. For instance, if we had to communicate with our feet, anxious feet would move faster, hurt feet would move away, and angry feet would stomp loudly. This exercise made me realize that embodying emotions through theatrical intentions creates exquisite choreographic possibilities.
I had so much fun exploring with Meghann and Michel–thank you for sharing your knowledge with us, if you’re reading. We enjoyed playing in the classroom, and we now have tools to employ in our everyday improvisation activities. Our time with you was incredibly enjoyable.