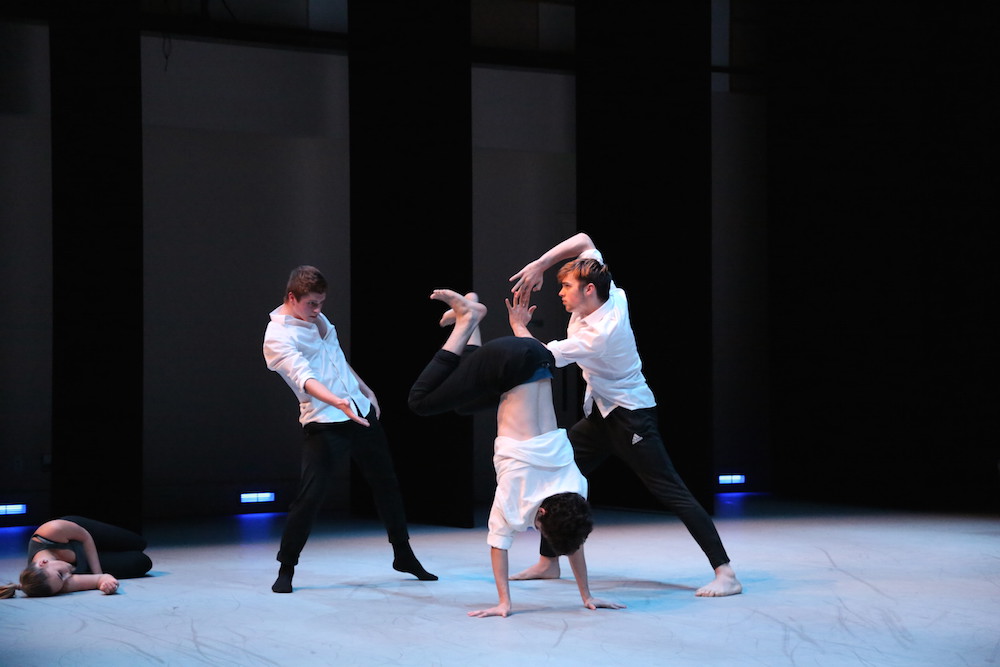 At Kaufman, inspiration is always in the air. I find myself constantly inspired–in and out of classes–by how beautiful my peers are as artists and individuals. I feel incredibly blessed every day to dance with these people, because we all have something different to offer. The Kaufman program aims for a diverse group of people and talent, which would allow for cross-pollination and exchange of different movement styles. This cross-pollination has successfully allowed for an endless amount of innovation and creativity, which in turn creates versatile dancers, movers, and thinkers. Alongside the growth that we acquire from the amazing Kaufman faculty, I personally would credit almost half of my growth in the past two years to inspiration from my peers.

Exchanging: from mentor to mentee and vice versa

I know I am not alone when I say that we are all constantly inspired by one another, which builds a sense of respect for each other as artists. This sense of respect for other artists was taken to the next level in the Spring 2016 when two of our dancers thought to begin a mentor-mentee system. This system was started by students, Rachel Walton and Trevor Daw, out of pure excitement about how much we had all grown from each other and how much more we could grow from one-on-one attention from a peer. This year sophomores were paired with freshmen, which not only allowed for a different level of exchange, but created a sense of unity between the classes almost immediately. The amount of knowledge that I have acquired from just simply being able to curate and innovate with my peers has changed my outlook on what I wish to contribute as an artist to society.

Creating within our community

Spring 2016 was the birth of SneakerPointe, a hybrid movement style I am planning to develop beyond Kaufman. The style was conceived out of the limitless imaginations of my peers and faculty mentor Professor d. Sabela Grimes for movement innovation in the world premiere of his piece “Ritual Embrace.” The process of working with one pointe shoe and one sneaker felt entirely inquisitive and naturally became more of a team effort to curate. The style received so much love in feedback, consequently triggering my want to continue with it. Following in the fall, I hosted two SneakerPointe workshops at Kaufman. The plan was to help integrate freshmen who were interested in being fast-tracked in SneakerPointe and/or contribute to the creation process. As of now, SneakerPointe is continually developing into a communal conversation, which comes to no surprise because of Kaufman’s infectiously communal atmosphere.

In general, many have frequented the studios during the weekends to host riveting workshops for their peers. The function of these self-governing classes varies; sometimes the intent is to play with discovered choreography, such as the start of GrandKids, a workshop brand created by my peers, Adam Agostino, Jessica Muszynski and Austyn Rich. At other times it may be to determine casting for a student choreography piece, which has been a plan of action for many, including freshman dancer Justin Pham. In whatever case, inspiration is always present, and there’s never a dull moment when Kaufman students get together to curate!