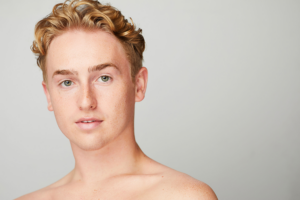 Growing up just outside of Toronto, Ontario, Canada, Findlay McConnell knew fairly early that dance was more than just an extracurricular activity. His training started at the age of five at Elite Danceworx under the direction of Dawn Rappitt. There, Findlay was introduced to a wide range of concert choreographers and worked with artists including Sonya Tayeh, Bryan Arias and Alexandra Damiani.

Findlay was accepted to the Glorya Kaufman School of Dance’s Bachelor of Fine Arts in Dance at the University of Southern California. During his four years at USC Kaufman, Findlay has expanded his dance experience by performing works by William Forsythe, Jiří Kylián, Justin Peck and Ohad Naharin, and by working with artists Jermaine Spivey and Jodie Gates. He also found a passion for commercial dance and has gained professional experience in the commercial world as a dancer on the Disney+ movie Sneakerella, for pop singer Tate McRae’s UK and Australia tours and on The Tonight Show with Jimmy Fallon. Findlay has been able to develop his artistry in the concert and commercial world and has fallen in love with both.

Alongside his BFA in Dance, Findlay has pursued a Minor in Psychology, which he finds extremely fascinating. With dance as a central focus in his life, Findlay hopes to continue to experience dance in all its forms and to be able to have a career that incorporates all the facets of dance that he loves.