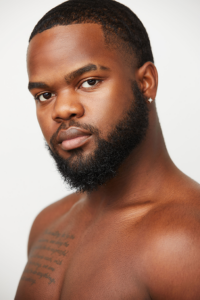 Jai “Jiggy Jai” Robinson was born and raised in Buffalo, NY. At the age of six, he began battling at Verve Dance Studio in Battle @ Buffalo, where he was spotted and offered the Michael Jackson Scholarship at The Future Dance Center for his formal dance training. From ages eight to eighteen, Jai traveled the United States with Future Dance Center and continued training in hip-hop, jazz, tap, ballet, contemporary, modern and lyrical. During his travels, he also worked as an Assistant for Tremaine and Pulse Dance Conventions, and as a dancer on stops in Janet Jackson’s Unbreakable Tour and Jody Watley’s SRL tour.

Jai is currently in the Bachelor of Fine Arts dance program at USC Glorya Kaufman School of Dance. He has had the opportunity to perform works by choreographers William Forsythe, Merce Cunningham, Jiří Kylián, Toyin Sogunro and Tessandra Chavez, among others. While at university, the Bloc Talent Agency signed him. Since, he has worked as a dancer for artists Drea D’Nur, Brandy, Chance the Rapper, and as a body movement coach for Joey McIntyre. Jai’s recent jobs include step performances with his fraternity Kappa Alpha Psi Fraternity Inc. and performances choreographed by Tony Bellissimo. His choreography credits include the opportunity to choreograph and dance for D’Mott, a Gospel / R&B artist, and choreographing for the University of Southern California’s first majorette dance team, the Cardinal Divas.