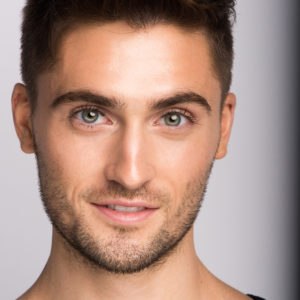 Originally from Raleigh, North Carolina, Jake Tribus grew up training at CC & Co. DanceComplex, competing in styles including contemporary, jazz, hip hop, tap and ballet. During his junior year of high school, Jake attended Next Generation Ballet in Tampa, Florida, on full scholarship, while training in classical ballet under the directorship of Peter Stark. Upon graduation from high school, Jake received a full academic scholarship to USC to pursue his BFA at the Glorya Kaufman School of Dance. While pursuing his studies at USC, Jake has worked with recording artists along with performing world-renowned repertory at USC. During high school, Jake pursued philanthropic work by co-founding a non-profit organization called Artists Giving Hope, raising money for various charities by teaching classes and performing around the U.S. He currently is the president of an official student organization at USC called the Southern California Choreographic Collective, whose mission is to showcase the emerging choreographic voices of Kaufman dance majors and raise money in partnership with Dancers Responding to Aids. Upon graduation, Jake hopes to engage in both commercial and concert opportunities, build his choreographic voice along the way, and continue to give back.