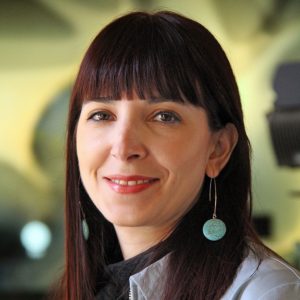 Marientina Gotsis has a broad background in arts, design and engineering with a special interest in interactive entertainment applications for health, happiness and rehabilitation. She founded and leads USC’s Games for Health Initiative since 2007, connecting health professionals with innovation in various forms of interactive media. She is cofounder and director of the Creative Media & Behavioral Health Center, an organized research unit between the School of Cinematic Arts and the Keck School of Medicine. This center designs, develops and evaluates entertainment applications at the intersection of behavioral science, medicine and public health. Gotsis and her teams have developed interactive experiences and products to help increase literacy and public awareness, change behavior, and improve assessment and treatment techniques with funding from the National Institutes of Health, Robert Wood Johnson Foundation, Norlien Foundation, Department of Education, Department of Defense, Children’s Hospital Los Angeles and the Shafallah Center for Special Needs Children.

Gotsis has tackled a wide range of knowledge domains and disease topics that include developmental neuroscience, wellness, obesity, nutrition, vision health, exercise, autism, child injury prevention, traumatic brain injury, post-traumatic stress disorder, and upper limb rehabilitation. Gotsis also co-directs the Center for Interactive Media Technologies in Health Care, a university-wide collaboration funded by the USC Research Collaboration Fund (RCF). She is an advisor to two more RCFs, the Institute for Integrative Health and the Center for Technology Innovation in Pediatrics. Her students have created award-winning work that has been showcased at Serious Games, IndieCade, Games for Change, ACM Siggraph and won awards by Unity, Steam and the USDA.

Gotsis has eighteen years of experience as a designer and technologist. Formerly the Media Lab Manager for the Interactive Media Division (IMD), Gotsis managed technology infrastructure, oversaw research development and directed several IMD research projects funded by Intel, Nokia and Amdocs in the Mobile and Environmental Media Lab headed by Scott Fisher. Prior to IMD, she taught art, design, animation and programming courses at the USC Roski School of Fine Arts, Harold Washington College, Columbia College Chicago, and Northeastern Illinois University. She began her career managing a startup internet service provider (ISP) company and providing various creative and technical consulting services for local newspapers moving to digital production. She has worked for production companies, (Quicksilver Associates, Simmonet Marketing) to design and develop materials for private companies, such as Accenture, Blue Cross/Blue Shield, Young Presidents Organization, government organizations, such as the City of Santa Monica and Marin Country and not-for-profits, such as the Make-A-Wish Foundation. She provided network engineering support for creative firms, such as Florian Architects, Common Knowledge Communications and Bauhaus and collaborated with educators at Tulane University, Great Northern Way Campus and the National Museum of Mexican Art.

She earned a BFA in Photography/Film/Interactive Media and an MFA in Electronic Visualization from the Electronic Visualization Laboratory (EVL) at the University of Illinois at Chicago (UIC) where she was a research assistant on large-scale computing efforts for networked virtual reality (VR) sponsored by the National Science Foundation. EVL is one of the oldest art and engineering collaborations in the United States (est. 1973), administering a joint degree between the School of Art & Design and the College of Engineering. She also pursued coursework in French language and literature, and pre-Colombian art history. Prior to EVL, Gotsis was classically trained as a fine artist in Greece at Athens College and at the School of the Art Institute of Chicago. She migrated her creative practice to digital media and virtual reality, incorporating choreographic techniques (Inside_Out), voyeurism (More), mass culture hoarding (Aural Masturbation), intimacy and identity (I, To The Loss of Innocence, Attempt to Rescue the Daily), and dance practice metaphors (La Boîte, To The Loss of Innocence) into her work. Gotsis took a hiatus from producing creative work to contribute to the upstart of the #1 game design program in the US at USC’s School of Cinematic Arts.

Inspired by the success her students in non-mainstream games and motivated by personal loss and grief, she began her investigation and collaborations into creating works using virtual reality, games and mobile media for health education and promotion, diagnostic and therapeutic applications. Gotsis has developed her own heuristic for designing and evaluating interactive entertainment, borrowing theory and practice elements from different fields. The heuristic interrogates the creative and scientific process across six domain ideals: cognitive challenge, affect regulation, dialectical engagement, somatic gratification, socioecological validity and semiotic integrity. Gotsis has lectured about her research and practice at Apple and Karten Design, presented findings at ACM, IEEE and HCI journals and conferences, as well as medical and public health outlets. She has been an invited think-tank participant at the White House, the Institute For The Future and various NIH/NSF/EU-funded workshops.

Gotsis is vice president of Choreo Theatro Company, which has created socially relevant and historically informed work, and advisor to The Lavender Effect, which is dedicated to preserving the history of LGBTQ culture in Los Angeles and demystifying human sexuality.