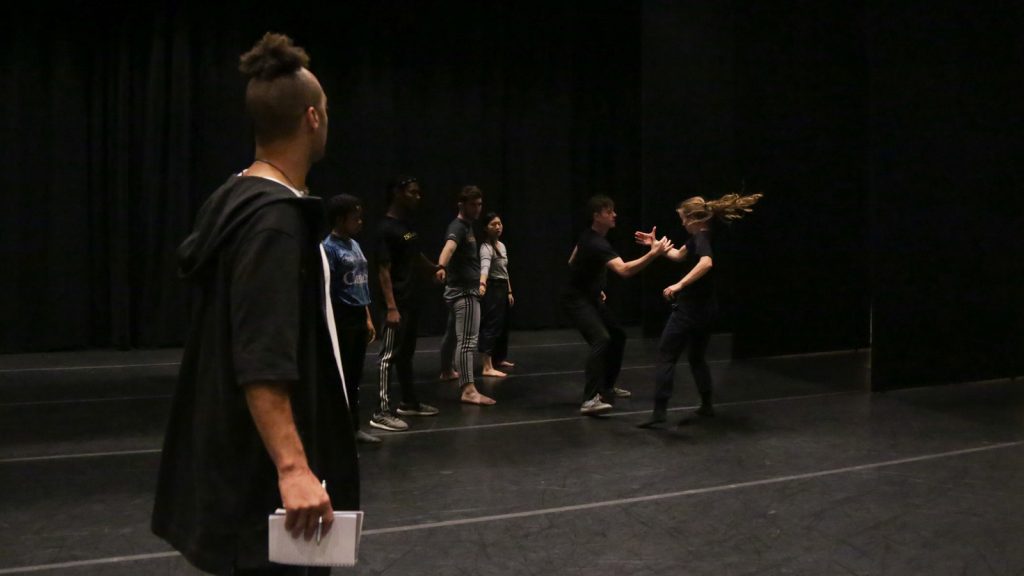 grimes in rehearsal with BFA upperclassmen | Photo by Mary Mallaney

This month, USC Kaufman juniors and seniors will perform d. Sabela grimes’ Ritual Embrace onstage at The Joyce Theater. The piece’s history suggests a full-circle culmination for these BFA students—or in grimes’ words, “a golden spiral.”

Almost four years ago, before the dawn of the Glorya Kaufman International Dance Center, Assistant Professor of Practice d. Sabela grimes led the first class of USC Kaufman BFA dance majors in a class exercise: giving each other full-bodied, genuine hugs. The dancers worked through body politics, through reinventions, and through giggles to find the perfect embrace.

“The repetition became ritualized, and sparked a whirlwind of dreaming around ‘what are our rituals? What are the things that we embrace? What is it about a hug where you intend to hold and then let go?’” grimes said. “It then became more deliberate: how do I make a symbolic system that creates that? How do we have those sort of conversations, invite perspectives?”

This call to community would become the opening motif of Ritual Embrace’s first iteration. Long morning rehearsals ending in lay-it-all-out-there cyphers gave way to an inquisitive work rooted in the spontaneity of social dance but groomed for the concert stage. The piece ended the 2016 Spring Dance Performance every night with a vibrant cypher, set to a live recording of Mahalia Jackson’s “How I Got Over.” The students danced through the aisles, celebrating the end of their first year together in a budding new school. 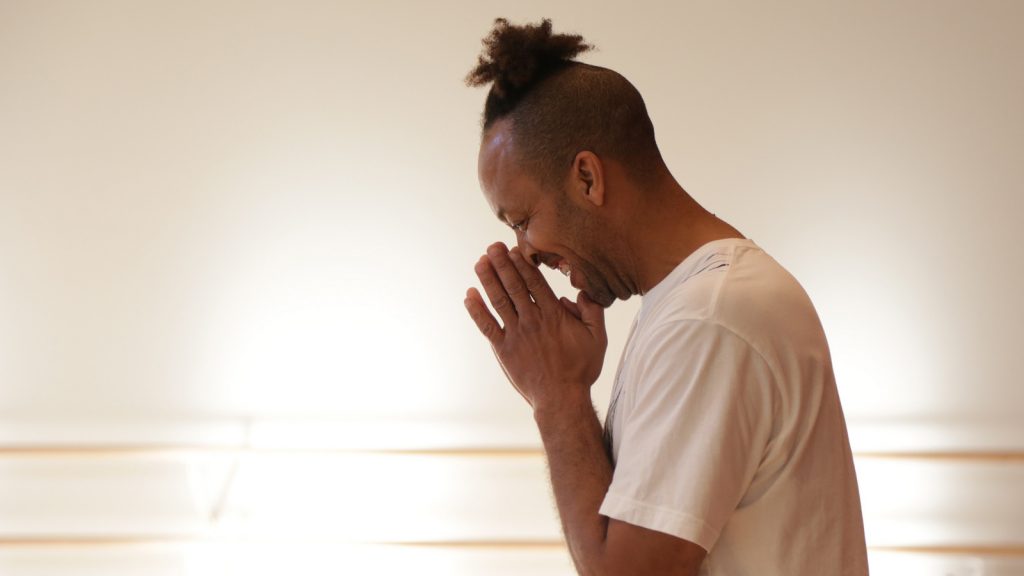 grimes in rehearsal with BFA upperclassmen | Photo by Mary Mallaney

In collaboration with the Class of 2019, grimes had created a poetic pot of movement that would bubble until this year, when the piece was put on the program for a performance at The Joyce Theater in February. grimes had a new cast and a new set of themes for the piece. He built an idea bank to begin. It’s full of paintings and maps and his own poetic phrases.

“Sun-filtered water ways, spiral, the water is speaking,” it reads.

grimes explained that a lot of this iteration has to do with the relationship between water and embrace.

His idea bank also uses the golden spiral. He chose it for its sacred geometry, its relationship to cycles and patterns. In the beginning of the latest—the third—iteration of Ritual Embrace, dancer Ardyn Flynt (BFA ’19) carves a golden spiral with her feet, a pathway that spans the whole stage. She is one of several seniors featured in the piece. grimes wanted to be sure that she and other graduating BFAs had time onstage to declare themselves to the professional world. Each senior is featured for at least a moment onstage, but not all of the Class of 2019 will participate in this version. Though the cast has been boiled down, grimes still acknowledges the early cast’s relationship to the work, whether spectator-participant or dancer or even vocalist.

Satori Folkes-Stone (BFA ’19) recorded vocal samples with grimes that have come to underlay the score.

grimes has made a habit of scoring his own work with recordings and samples. This particular mix uses a podcast, Folkes-Stone’s vocal riffs, and a poem I myself wrote at grimes’ request. His specific attention to his students’ individuality both in and outside the studio gives both the performers and the work depth.

“Over time, as my relationships developed with the artists involved, it was so beautiful being invited into their creative practices and the other sort of disciplines that they’re engaged with,” he said. “Satori agreed to just play with some melodies.”

Folkes-Stone said she was reluctant at first. With grimes, who has become a mentor for her, she finds that she pulls back when he hands her the spotlight, before committing and diving in.

“Then I get over myself, and it’s fine,” she explained. “I just feel honored to be part of his process; it has affected my own process as a dance-maker so much. This time he hummed some melodies, I repeated them, and then he told me to improvise and left the room, with the microphone on.”

What resulted was a base of melodies that grimes layered into the score, in an almost-repetitive but not-exhausting fashion. Both soulful and haunting, Folkes-Stone’s vocals open the space for the audience to take in the entire space as it becomes busier. The score reflects the landscape, adding words and more percussive sounds on top.

grimes sent me his idea bank and waited until I had responded with a preliminary text, which we then recorded guerilla-style in the USC Kaufman conference room with a portable microphone. Hearing it months later, the first time I saw the piece, was like hearing a classic oldie for the first time.

“We have these two sort of beautiful documents, sonic poetics,” grimes said. “The original piece and its restructure for live performance. I like to think of it as DIY versus DIWO: do it with others. Do it in regards to community and relationship. It’s about building, cultivating, trusting.” 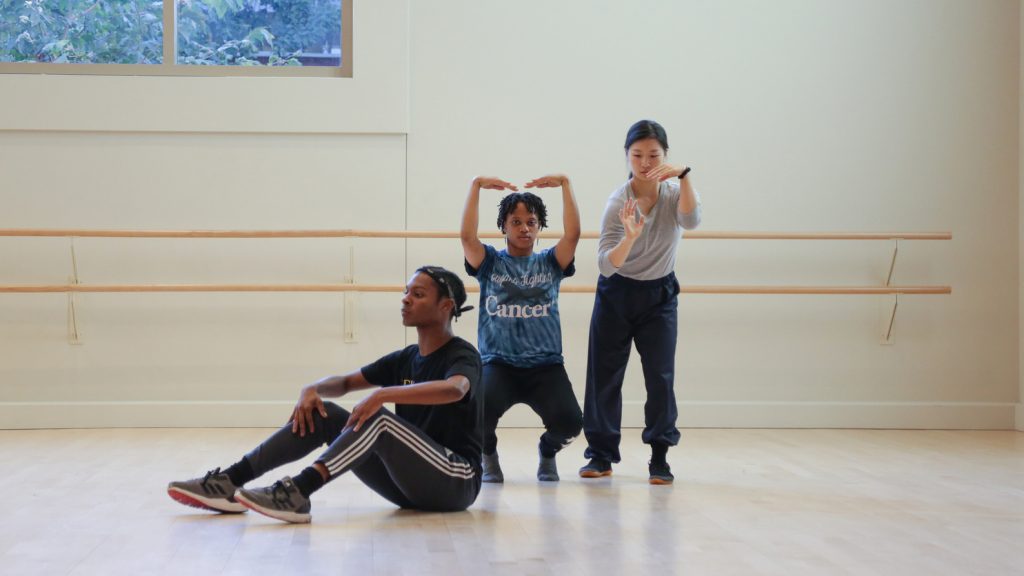 It is clear that grimes trusts each dancer with his intention. He communicates clearly and then leaves his idea bank in their hands. The entire cast of this third iteration is essential to the body of work.

“It’s passing the symbolic system. Trusting that they’ll invest time, energy, talent, flavor into it as part of an ongoing ritual, practice,” he said.

Though grimes and the 2019 cast have reinvented the piece and invited new perspectives, at its core remains the ritual embrace of the community. As the BFA Class of 2019 graduates, this community will expand. But their work here with grimes and their peers will remain a center to which they can refer and return.