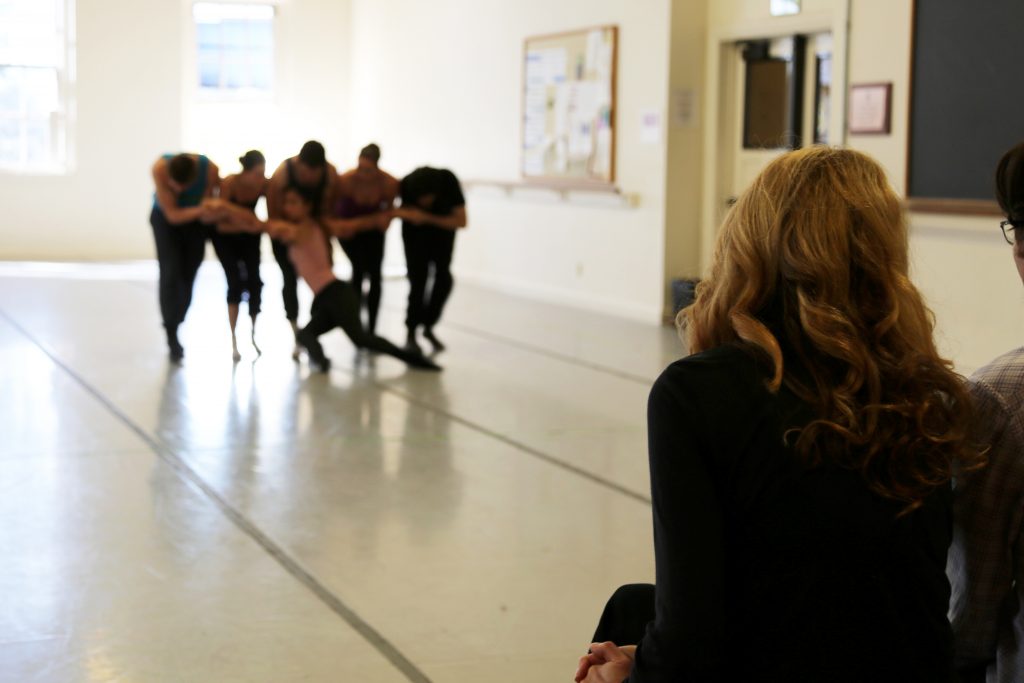 “Janeen and Michael Damian will be here in just a few minutes,” Vice Dean Gates said with a mischevious smile. “So you might want to change into some nicer clothes, because they’ll be looking at you for potential future film casting.”

Our eyes widened collectively, and all eyes flickered toward the mirror to check our hair and makeup–the room’s energy catapulted and whispers circled frantically through our cypher. In a few minutes, stray hairs had been tucked away, pointe shoes had been strapped on, and we were ready to give the best épaulement that these film directors had ever seen.

Performance level definitely shifted upward a notch as we ran through various pieces from our repertory, and I soon realized I was about to dance an improvised section of Forsythe’s In the Middle, Somewhat Elevated in front of our guests. My heart rate through the roof, I glanced at the front to find that both Damians were smiling ear to ear, fixated intently on Megan as she entered for the women’s duet. Their smiles only grew wider as she continued through the phrase, her energy radiating through every limb as she applied the concepts we had been working on all year.

This made even more sense in our discussion after rehearsal, when the Damians, who are anything but new to the film game, told us that they look for presence in a dancer, for that electric quality that Janeen Damian saw in the great Michael Jackson when she danced for him years ago. And their criteria was evident in the preview and film trailer we viewed: attention stealers Keenan Kampa, Comfort Fedoke, and Ian Eastwood, among others, bring the dance scene to life in their new film, High Strung.

The Damians’ visit opened the USC Kaufman channel to the commercial dance scene (the concert dance scene has been well covered in these first two semesters, already) and gave us a taste of the audition world–now, it seems, the test will be to take the New Movement to open auditions.