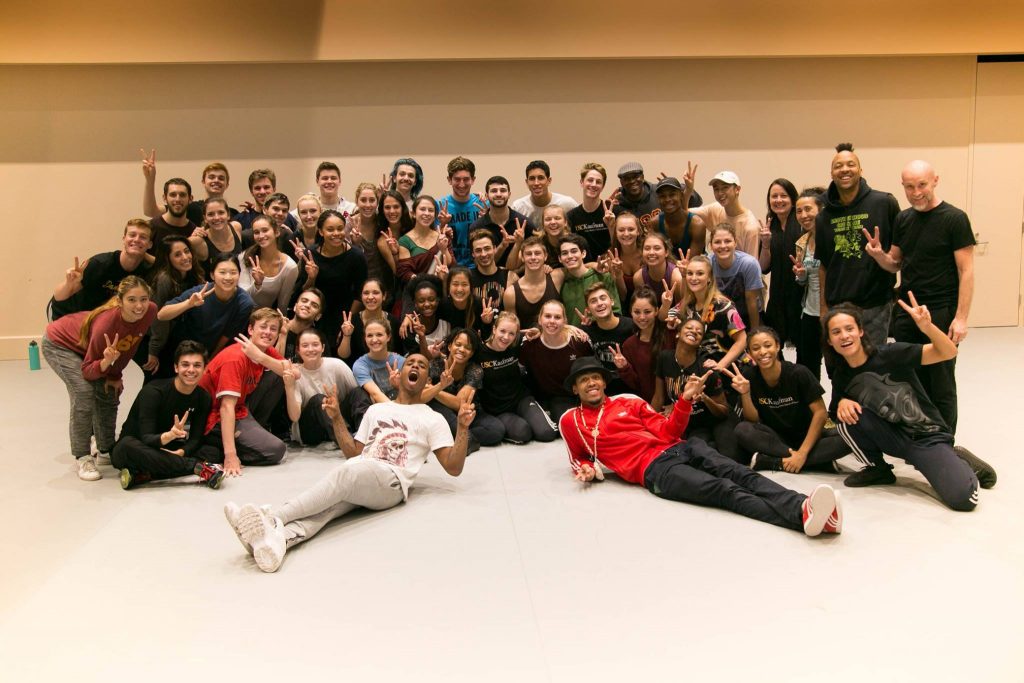 “You guys need to understand where it comes from first,” Lil Buck explained before he and Jon Boogz launched into a combination popping/jookin’ master class.

If there’s anything we’ve learned at USC Kaufman in the last semester as a sophomore BFA class, it’s that we must give credit where credit is due. Professor Saleemah Knight has made that abundantly clear to us in our Dance in Popular Culture lecture, and Lil Buck and Jon Boogz seemed to pick up exactly where she left off. They credited their mentors, they explained the history of both styles, and they made sure we knew where they had learned their own skills. These men were not men of ego. They were servants of their art form. And we as students welcomed them in awe.

Boogz began with popping techniques, not teaching a combination first but rather supplying us with drills that would help our muscles to fire properly. This way, he explained, we could go home and practice our popping in the mirror, and if we drilled enough, it would become second nature. Both BFA classes felt the burn of the muscle contractions as we worked through bicep, tricep, and wrist contractions, then walked through the basics of waving. Boogz, who has been popping for 16 years, impressed us with his precision, then handed the microphone to Lil Buck.

Buck talked us through the history of jookin’ in Memphis, explaining how the form was conceived and how he found his way to it. He taught us a combination, but also supplied the rich history of each step as he gave it. Not only that, he explained the fundamentals of gliding. None of us, of course, could do it as well as he, but I can guarantee that we’ll be practicing like mad.

The next night, we got the chance to see them perform live with cellist Ashley Bathgate in What Moves You, and their movement poetry spoke volumes. A piece about Standing Rock echoed Boogz’s words about his visit to the location just a few weeks prior, and Lil Buck performed his famous rendition of the Dying Swan. We had seen their collaboration with visual artist Alexa Meade the evening before at the end of class–a video called “Colors of Reality,” where they explore both movement art and their voice in politics. Their organization, Movement Art Is, elaborates on the ability of the artist to speak things that words cannot, and they did exactly this on the Bovard Auditorium stage.

We gathered outside after the show to discuss how we could do the same through the New Movement–but only after asking that they come back and teach class again soon.

Read about the USC Community master class with Lil Buck and Jon Boogz.