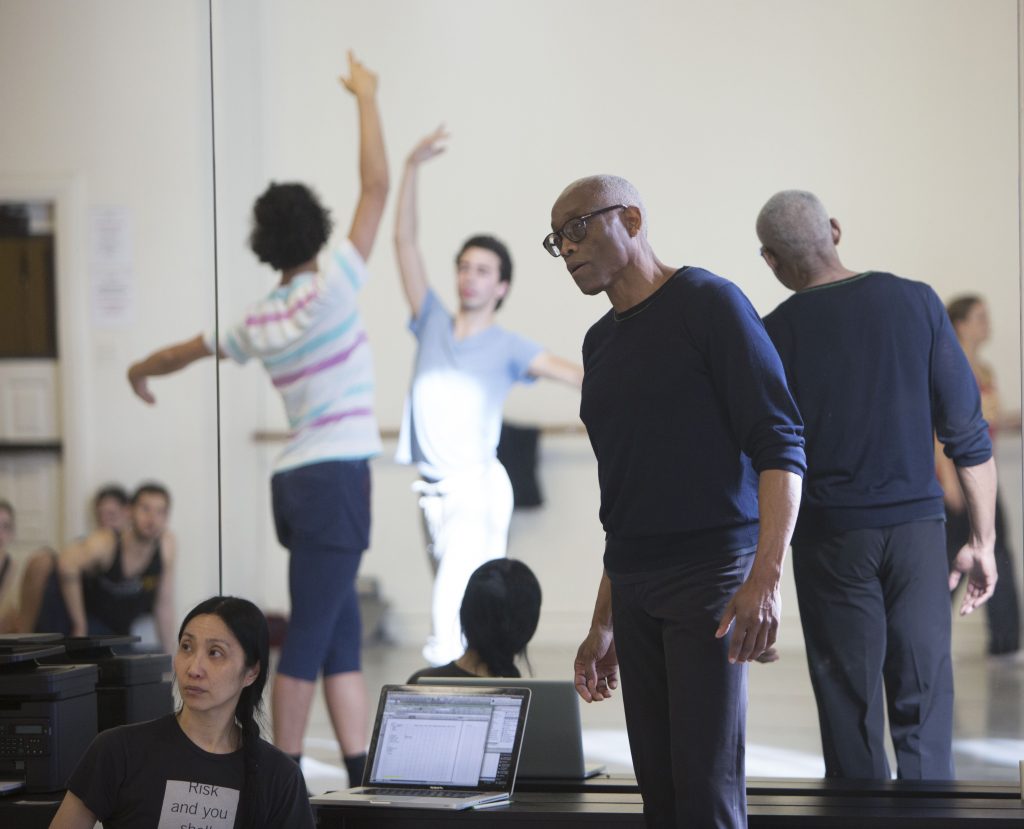 His personality is magnetic, his cheekbones formidable, his voice captivating.

He calls us into a circle and asks who among us is Jewish. Two raise their hands, slowly. He tells them to be more proud of their heritage. “Raise your hand higher!”

He then floats around the circle, learning everyone’s name and taking a simple moment to move with each of us. Some of us he leads into the space, some he lets lead him. Some he embraces tenderly.

“Celine?” he says when he reaches me. “That’s quite a provocative name. Do you know who he was?” I nod to affirm that I do, but then realize that I don’t. I’m just nervous. Those may not even be the words he spoke; I cannot quite hear him over the deafening thump of my heartbeat because he’s holding my hands. He crosses them so that I turn into his arms and I smile and pray that the moment never ends.

He is an enigma, to put it lightly.

He watches the selected group of eight BFA dancers perform their solo for his piece, then tells them to repeat this movement inside a clump of the rest of us, whom he has instructed to circle the room once in fifteen minutes. We learn a rhythm that Ardyn has choreographed into her solo, because he tells us to.

Janet Wong, his co-artistic director, teaches us the rules of the wave while his dancers Antonio Brown and Talli Jackson walk the eight dancers (now the nine, because Trevor has been added into the mix) that were chosen to perform in “Story/Time” through choreography based on a few phrases, their own solos, and a couple set tableaus.

“Before I get too attached, which of you can be in rehearsals tonight and perform with us tomorrow?”

Wide-eyed, we raise our hands. That’s how I accidentally ended up in “Story/Time” for one night.

He walks down a line of us, requiring that we articulate the alphabet clearly to him. He gets bored after a few letters from one dancer and moves on to the next.

Alyssa is so nervous that she forgets the order of the letters in the alphabet. “You scared me!” she laughs as he hugs her.

He then assigns a new task: that we say the Pledge of Allegiance with our eyes closed. I falter for a single second and he prompts me, “and to the republic.” I finish, and he says “good.” That’s all.

We break for lunch.

Rehearsals in the theater add an entirely new dynamic because we’re adding in the live musicians, and the composers who wrote the original pieces are sitting in the house. He asks them first before he changes any of the dynamics or cuts any of their pieces, out of respect, I imagine.

Long hours and many changes plus an enormous personality directing us make us tired, but we somehow maintain this elevated level of focus that I have never before seen or felt. We are united and we are growing as a united group. As one.

I leave rehearsal satisfied and mentally stimulated; I’m so very proud of our focus.

Tuesday, Janet gives us the spreadsheet that she kept on Monday of the show’s complex order and copious amounts of material that we have produced. We finally figure out our transitions.

But in the theater, lighting and technical rehearsals are tedious and tiring. They take so long that we don’t even have time for a full run through of the show before the house doors open and we must perform. Somehow, Austyn is consistently delivering life and reality through his improvised solo every single time he walks onstage. After three consecutive full-energy runs, he is sweating bullets. The final configuration of the stomping section pulls us back together before Stephanie finishes, giving us all chills just as she did Monday when she and Bill T. Jones walked through the closing phrase side by side.

We have twenty minutes to shove whatever food we can into our faces. Then we perform.

The piece goes quickly; it’s thirty minutes long, but it feels like two minutes before Helen and Stephanie are downstage, Helen yelling the Pledge and Stephanie silently/subtly convulsing, and the cello enters with the theme. Chills run down my back.

Then, it’s time. We finish our “diversion” circle and I take a single breath to brace myself before Helen climbs up a human staircase of us to climb the stage wall.

She receives the spirit, just like Bill T. Jones told her to earlier in the day. Just like his mother did in Italy years ago. It comes from deep, deep within her at that moment, where she screams from five feet above the ground, expressing a feeling she didn’t even know she had.

We run back into line after putting her down–we have experienced this change, this growth, together. As one.