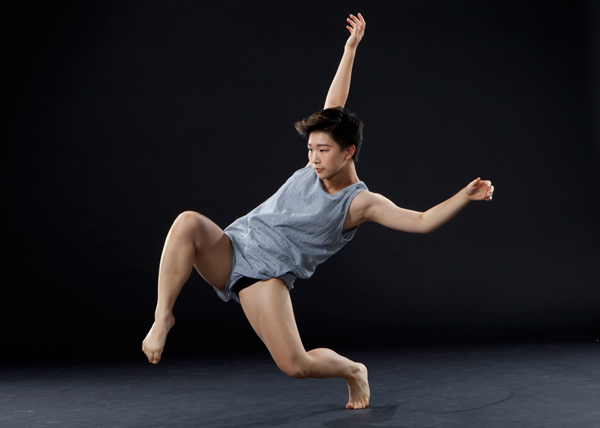 Sometimes, this program is so surreal that I have trouble grasping the idea that I am a part of it.

Usually, my blogs read in sequential order of whichever weekly events have transpired. This one is going to be different, because it absolutely has to start at one particular moment–a moment that made sense out of my entire semester, and simultaneously made me realize how very fortunate I am to be here.

Closing night, I sat in the wings to watch Rebecca, Jordan, Jessica, Adam, Madison, and Trevor perform Lickety Split, a breathtaking contemporary piece choreographed by Alejandro Cerrudo. The stage lights softly illuminating six figures in grey set a beautifully calming tone before they began. In the finale, a single fluid motion that they performed in a canon was so musical that it struck the sound waves in perfect time and traveled straight into my chest. And I felt. I could not pinpoint what I felt, but I felt this sensation very strongly. After inhaling deeply and basking in this beautiful unnamed feeling for a little while, a more familiar feeling washed over me, one that I have been feeling all semester: pride. Articulating just how much pride I feel in my fellow BFA students, and to be a part of this collective effort to push dance into a new era, is extremely difficult. To me, the fact that they evoked a feeling so new and unidentified meant that our program is doing exactly what it aims to accomplish.

There, backstage, I looked at the last four days of long rehearsals and shows, and realized that I would not have wanted it any other way. Such a diverse program of absolutely brilliant works has taught us so much about ourselves: Paul Taylor’s Cloven Kingdom, Marius Petipa’s Le Corsaire, William Forsythe’s Small Model, d. Sabela Grimes’ ’til I thirst, Alejandro Cerrudo’s Lickety Split, and Dwight Roden’s Red each united us in a different way, cementing our position as a bonafide BFA program, ready to take the world by storm.

Not just that–viewers said we looked less like a college program and more like a company. That remark alone stood to justify all of the long hours we had spent together, whether they be in class or rehearsal or spent just studying together. Reflecting on the semester, I could not help but smile at the amount we had accomplished together.

This moment backstage tied my whole semester up and put it in front of me in a neat little package. Well, not so little. A lot happened this first semester, and maybe that is what made some of it feel chaotic, so much so that I needed so much time to process it. This process has taught me so much about artistry and dance and its potential; the one word that sums up these last few months is grateful.

I am eternally grateful that this opportunity was even presented to me in the first place; that I have experienced such a monumental shift in this group of BFA students; that this group is so dynamic and so accepting; that our professors are so nurturing; that our leap of faith in this new program has taken us further than we ever thought possible.