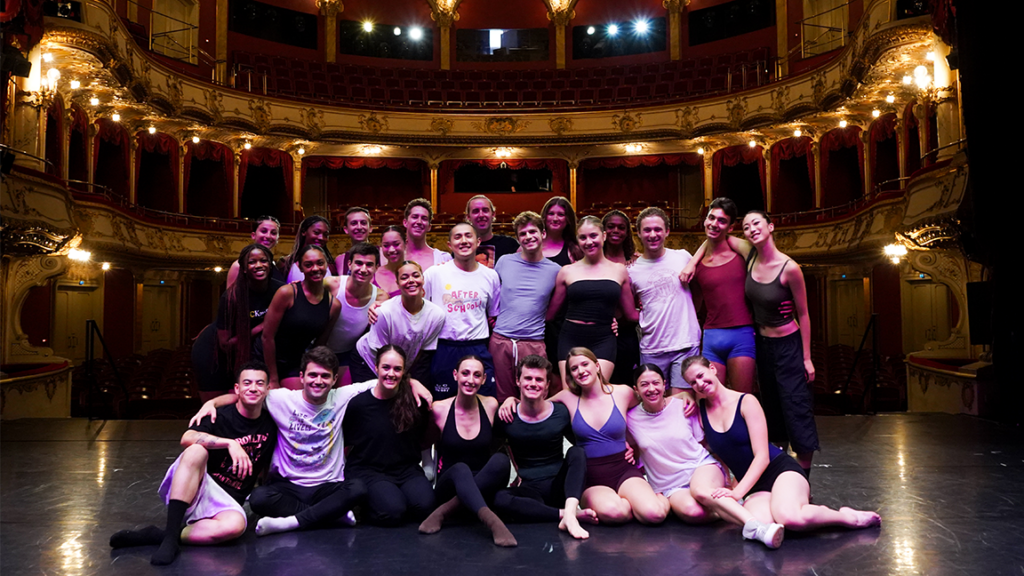 Despite an almost 24-hour travel day and insane jet lag, participating in USC Kaufman’s European Debut was an opportunity of a lifetime. As I stepped onto the plane to Germany, my heart bubbled with excitement. Maybe it was because I wanted the 11-hour plane ride to be over. Or maybe I knew that in just a moment I would be in Fürth, Germany performing with my best friends. Arriving in Germany only amplified the excitement I felt. Even the most chaotic of processes, like baggage claim or ensuring everyone made our bus, filled me with delight. Of course, the day caught up with me, and I crashed that night not fully knowing what time or day it was.

The next morning, I still felt that same giddiness. We were fortunate to explore the nearby Nuremberg, learning about the city’s history and taking in its scenic beauty. As the day went on, we continued exploring and enjoying all that Nuremberg and Furth had to offer. Together, we dined at the “largest bratwurst house” in the world, Bratwurst Roeslein, and tried traditional German bratwurst and sauerkraut. After venturing a little more and, of course, eating a little more, many of us decided to head back to Fürth to call it a night before we started our first day at the Stadttheater Fürth.

Walking into the Stadttheater Fürth for the first time felt like stepping into a palace. Every detail seemed so beautifully crafted and ornate. From the grand chandelier hanging from the ceiling to the gold embellishments lining every doorway and balcony, I thought I was living in a fairytale. After a brief company meeting and a tour of the magnificent theater, we started to tech our program right away. The show for the three nights included Whelm by Bret Easterling, Big White Room by Tessandra Chavez, In the Clouds by d. Sabela Grimes, RODEO by Justin Peck, and Minus 16 by Ohad Naharin.

We only had three days to tech and rehearse before performing, so the days were long and exhausting. However, spending this much time rehearsing made the opportunity to work and perform in the Stadttheater Fürth that much more fulfilling. We were immersing ourselves in the commitment of touring and performing abroad, which is a great experience to have before starting a professional career.

Our last day of tech coincided with opening night, and as the hours drew nearer, you could feel the electricity and anticipation. That night I would be performing Whelm, RODEO, and the “Dancing with the Audience” section of Minus 16. As we gathered backstage and the time for us to perform grew closer, I felt a range of emotions. I felt excited, anxious, joyful, and, of course, a little nervous. I took some deep breaths to help calm and center myself, then suddenly the curtain opened and the heart wrenching swells of the music for Whelm began to play. My heart fluttered and surely skipped a beat, but it was finally happening. We were performing in our European debut.

Each night provided that same ecstatic energy and bundle of feelings, and each show felt extraordinary. The audiences in Fürth were unlike any other; you could sense the appreciation and love for dance just by the way they watched and reacted to each piece. While preparing for the program and performing it was exhausting, it was so gratifying. Dancing at the Stadttheater Fürth was so fun, and I will cherish this for the rest of my life. This experience taught me not only about what it feels like to tour and dance abroad, but also about myself and the artist I want to become.

USC Kaufman’s Debut Performance in Germany is made possible with support from our lead sponsors Elfriede and Heinz Bruder, Beate and Mark Caso, Bruder Spielwaren, and Bruder Toys America.

Additional travel support provided by the Rod and Elsie Nakamoto Travel Fund.  USC Kaufman Artists in Residence are supported through generous funding from The Choi Family Artists in Residence Fund. Additional production and travel support provided by Katherine and James Lau. This performance of Minus 16 is supported in part by Renae Williams Niles and Gregory Niles.

View more about the BFA students’ experience below: