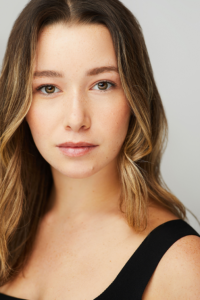 Ava is originally from Dallas, Texas. A senior at the University of Southern California Glorya Kaufman School of Dance, she is studying to earn a BFA in Dance and a Minor in Musical Theatre. In her first professional theater production at age fifteen, she was the associate choreographer after Sandalio Alvarez discovered her detail-oriented eye as dance captain in a production at Booker T. Washington High School for the Performing and Visual Arts. Ava served as the associate choreographer for productions of On Your Feet, In the Heights and Newsies at John W. Engeman Theatre in New York. She choreographed her first full length musical, The Addams Family, in 2021 at USC. Recently, she played the role of Edward Rutledge in the 1776 Broadway Workshop at Jacob’s Pillow under the direction of Jeffrey Page.

Her extensive work in film, television and commercial productions includes dancing in a Kenny Ortega-directed Marshall’s commercial, which was choreographed by her longtime mentor, Nadine ‘HiHat’ Ruffin. She performed at the Grammys in a Target commercial and music video for “The Middle” with Maren Morris and Zedd, choreographed by HiHat, Noelle Marsh and Janelle Ginestra. She performed in a Hasbro commercial and on various episodes of NBC’s “The Voice.” Vocally, Ava trains extensively with Sharon Catherine Brown, Carrie St. Louis and the Matt Farnsworth Vocal Studio.

She brings her favorite quote, instilled by her father, “be a leader, not a follower,” into any rehearsal space. Whether serving as a cast member, choreographer, dance captain or whatever else is thrown her way, she brings confidence, grace and kindness to her work.