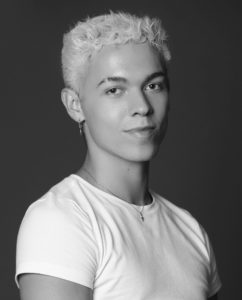 Camryn Pearson is from the foothills of North Carolina where he spent his childhood competing nationally as an all-star athlete. He fell into dance unexpectedly and has been in love since. Camryn began his formal dance training at age 16 at the University of North Carolina School of the Arts. While in this program, led by former American Ballet Theatre principal dancer Susan Jaffe, Camryn performed classical and modern works by Merce Cunningham, Jose Limón, Brenda Daniels, Helen Pickett, and more. Upon high school graduation, he continued his training with scholarship at the USC Glorya Kaufman School of Dance under the direction of Jodie Gates, where he is now a senior. While pursuing his BFA in Dance, he has had the opportunity to study under tremendous influences such as William Forsythe, Aszure Barton, Barak Marshall, Fiona Lummis, Zippora Karz, Desmond Richardson, Dwight Rhoden, Jermaine Spivey, Hope Boykin, and Spenser Theberge. In the Spring of 2019, Camryn was chosen to represent USC Kaufman at the internationally acclaimed Gala de Danza in Cabo San Lucas, Mexico. Camryn has trained and performed as a highly versatile dance artist who can adapt to virtually any stylistic form he delves into. He thrives in creative processes and is able to productively collaborate under varying circumstances. He aspires to join a professional contemporary dance company, and continue to find new ways of fusing hip-hop aesthetics with contemporary and balletic forms.