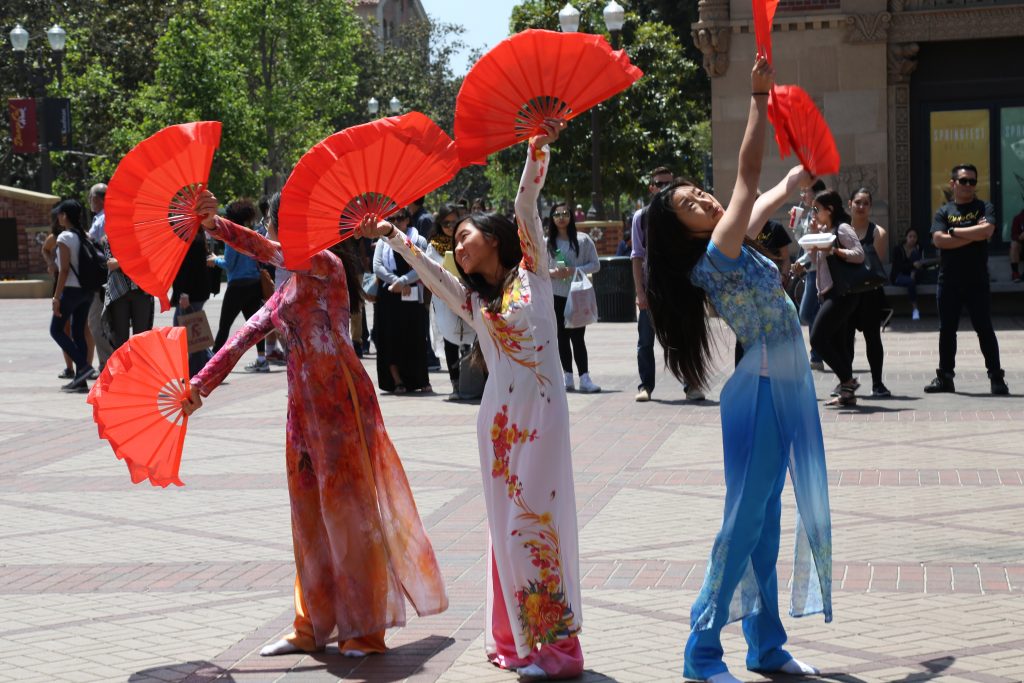 On Wednesday, April 27, dance clubs across campus came together for an open-air performance in the middle of USC’s Hahn Plaza. The showcase, part of USC Kaufman’s Dance On! Week, featured a wide array of cultures and dance styles.

DJ Café ’84, a student from USC Thornton, played the music for the afternoon. Passing people stopped to watch. When a crowd had gathered, the performance began.

The USC Ballroom and Latin Dance Team opened with a tango performance, and then returned with a piece of swing dance. Chaotic 3, the hip-hop team of the Chinese American Student Association, followed with a street dance routine that merged multiple songs. Next, USC Zehers presented the a hybrid Bollywood piece that mixed ancient Indian traditions with modern hip-hop.

“It’s full of energy around here and the fusion of cultures is very attractive,” said Naiqi Zhang, who was visiting USC as a tourist. “This pop-up event was fun and surprising. It left me (with) a great impression of the school.”

The second half of the event expanded on the multicultural lineup. A student from the Traditional Chinese Dance Association prepared a solo performance accompanied by peaceful, traditional Chinese music. The USC Vietnamese Student Association displayed a piece colored by rippling red fans that the dancers manipulated to the music.

Break ON 2 Latin Fusion danced to a tune that mixed flamenco and Latin hip-hop. Their performance balanced humor and drama with shoulder-shaking, contemporary dance moves.

For the finale, students from the Trojan Dance Force performed a fierce hip-hop piece that finished with an awe-provoking split. The Street Dance Society then rounded out the show with a breakdance piece that drew the biggest crowd yet.

Whether or not students had anticipated the public show in the heart of campus, the Dance Club Performance during Dance On! Week was an enticing, open invitation to celebrate dance and culture. Through their work, the students from the different clubs embodied the passion that drives dance on campus.