Video: Leading up to USC Kaufman’s NYC Debut at The Joyce Theater 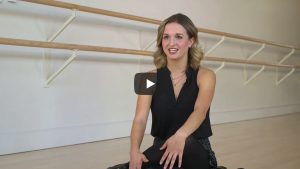 What is dance for you?

“Dance is what I find myself to be most passionate about in life.” –Lenai Wilkerson (BFA ’19)

“I love dance just because it’s kind of a chameleon. It can fulfill certain purposes based on what I’m feeling.” –Stephanie Dai (BFA ’19)

“I think early on, dance was a way for me to express myself.” –Juan Posada Penagos (BFA ’19)

“When you are having troubles with a relationship, or something like that, how do you normally react? You say something or you move your body in some sort of way. And dance to me is a form of either giving that emotion out, reacting to it that way, or showing other people that you have that emotion towards them.” –Trevor Daw (BFA ’19)

“It’s also been a great way to communicate and to connect with other people from very different backgrounds through movement.” –Stephanie Dai (BFA ’19)

“I didn’t realize how much I loved dance until I got to USC. Here, I found all the different sides of it. I really saw everything that it could be.” –Jackie Schiffner (BFA ’19)

“Before I started dancing, I didn’t find anything that would make me feel that happy. And I think that when I found dance, I felt different, I felt genuine, I felt like an individual. I felt like a special person.” –Juan Posada Penagos (BFA ’19)

What does it mean to perform at The Joyce?

“So the opportunity to go to The Joyce Theater in New York City was a dream of mine. The significance is truly the opportunity to be seen at a nationally recognized venue.” –Jodie Gates, USC Kaufman Vice Dean and Artistic Director

“I’m beyond excited to be performing at The Joyce, especially the rep that we’re bringing. I’m so excited to demonstrate that, and to bring it to such a big stage, and to show what USC Kaufman can do, and what we’ve built here.” –Jackie Schiffner (BFA ’19)

“It’s just an incredible example of how I can really be performing on the stage as a professional dancer in the future and how these dreams that I’ve had since I was little aren’t far-fetched ideas, and that they’re almost becoming reality.” –Stephanie Dai (BFA ’19)

“Just being able to take everything we’ve learned, take it to New York and step onstage, and perform and have that experience. I think it’s going to be just a great challenge.” –Juan Posada Penagos (BFA ’19)

Performing for an industry audience

“We felt that this was a prime opportunity to invite our dance colleagues and individuals on the east coast that have an interest in these students.” –Jodie Gates, USC Kaufman Vice Dean and Artistic Director

“Being able to show my own work, for a crowd of people who are in the—the real world, for me is a way for me to sort of end the idea of college, and begin the idea of post-graduation career.” –Trevor Daw (BFA ’19)

“That whole weekend in New York is gonna be a lot of work. We already know that. We were told, basically, the morning that we wake up after getting off the plane, we’re in rehearsal at 9 a.m. So that’ll be fun.” –Jackie Schiffner (BFA ’19)

“After the performance, there’s a meet-and-greet with our invited audience and VIPs, particularly for any agents or choreographers or directors that are interested in some of the students that they’ve just seen perform.” –Jodie Gates, USC Kaufman Vice Dean and Artistic Director

“A lot of what we’ve been working on here at Kaufman is professional development. How do you talk to donors? How do you talk to company directors? So I hope to not only dance my best, but to also use those communications skills out there.” –Lenai Wilkerson (BFA ’19)

Shaking off the nerves

“I think there are a little nerves. Of course it’s pressure, it’s ‘Oh my god! We’re going to be dancing on this stage where some of the major ballet companies perform.’” –Juan Posada Penagos (BFA ’19)

“As I wait to go onstage, I imagine that this is the moment I’ve been waiting for. This is my time to make a statement.” –Lenai Wilkerson (BFA ’19)

“I really want to make it a priority to be authentic in my movement. I’m okay with however you receive it but I’m just confident in how I’m moving. And I would like to share that with you guys.” –Stephanie Dai (BFA ’19)

“I’m really looking forward to just putting it all out there and really showing what we’ve worked on.” –Jackie Schiffner (BFA ’19)