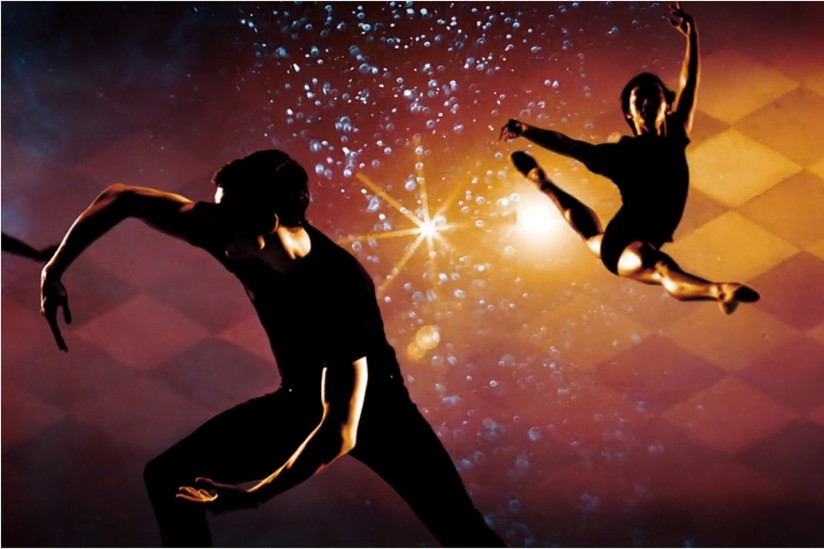 A website for a school of dance shouldn’t be static, right? That’s what Jodie Gates, vice dean and director of the new USC Kaufman School of Dance, thought. And, she reasoned, the website should illustrate at least one of the school’s innovative partnerships with the USC Thornton School of Music, Glorya Kaufman Presents Dance at the Music Center and the USC School of Cinematic Arts (SCA), among others.

So she reached out to Mike Patterson, associate professor at SCA, to collaborate on a full-screen video that welcomes visitors to the school’s homepage. There, dancers move in purposeful choreography in front of an animated background designed by Patterson and fellow faculty member Candace Reckinger.

A new website video, part of a series that Gates and Patterson have planned, launched this week. The first video launched with the school’s website last year .

Patterson and Reckinger consider themselves “blended media” artists — ones who combine a variety of artistic skills and platforms to create one singular, unified art form. Their work regularly uses animation and traditional filmmaking practice, such as cinematography and lighting design, with newer technology like computer graphics, projection mapping and visual effects.

The pair have collaborated on several popular music videos that combined live action with animation, including the Grammy Award-winning Paula Abdul music video “Opposites Attract,” and worked with USC Judge Widney Professor of Music Michael Tilson Thomas MM ’76 on a five-screen visualization of Russian composer Modest Mussorgsky’s “Pictures at an Exhibition” in collaboration with their animation students and graduates.

“Kaufman’s new curriculum focuses on an interdisciplinary approach, and our partners are an integral part of our program,” Gates said. “Working with Mike has been a wonderful experience. The videos for Kaufman’s homepage are a taste of what’s to come.”

Another hint of what’s to come is the idea that dance choreography can involve more than dancers.

Patterson has spoken with William Forsythe, the incoming artistic adviser of USC Kaufman’s Choreographic Institute and member of the dance faculty, about how both USC Kaufman and SCA can further benefit from collaborations. He pointed to Forsythe’s work with large-scale installation, video and other artistic mediums that incorporate elements of choreography and movement as an example of how technology has enhanced the application of dance in art.

“With Bill’s work, there doesn’t necessarily need to be a dancer,” he explained. “His philosophy is that you can choreograph many things. That’s an idea that we as animators and blended media artists really understand — choreography is an essential component! So what’s to stop a choreographer from engaging with these new art forms where they’re working with elements other than dancers?”

According to Patterson, one of the most innovative advances in his field involves the use of projection, animation and motion capture to create an immersive multimedia performance. Although his previous projects have explored the fusion of live performance and visual effects, Patterson suggested that improvements in technology are pushing the boundaries of the medium further than previously expected.

“I’m very interested in how we can incorporate projections and dance together in a live performance scenario,” he said. “There’s some amazing work being done right now with technology that senses the motion of live performers to create an interactive experience. Visual artists use the live motion data to generate animations that interact with the dancer. These new tools are creating an entirely new breed of artist that creates a dialogue between the dancer’s motion and the projections.”

As USC Kaufman begins preparations to enroll its first class in fall 2015, Patterson explained that USC Kaufman has begun an exciting journey.

“This is only the tip of the iceberg,” he said. “We’re just kicking off our collaboration with USC Kaufman, and there’s so much more to explore together. Because of these collaborative possibilities, it makes USC a very powerful place to be in the arts.”