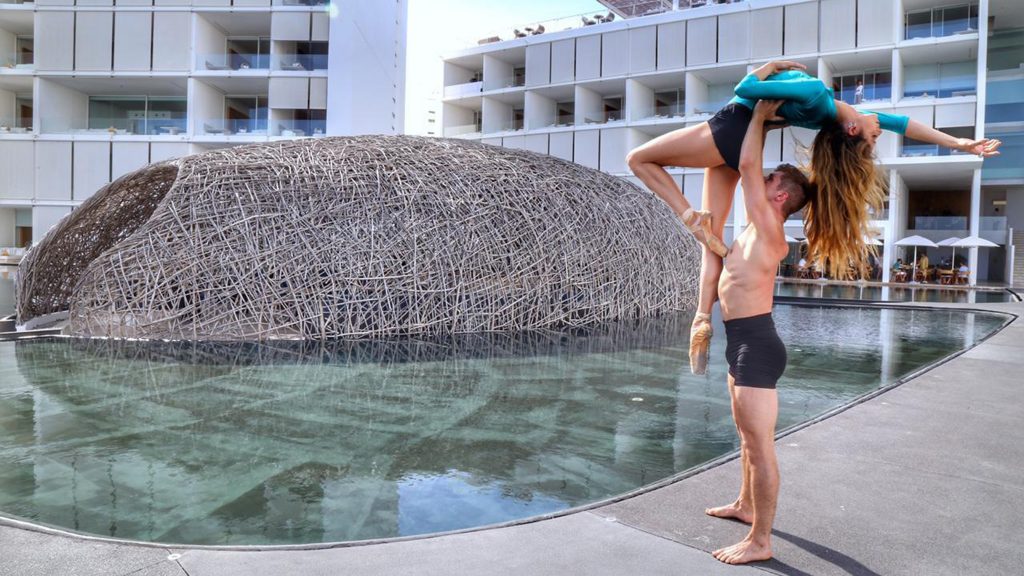 Carrillo has returned home every year to participate in the gala. Lyon suggested a few years ago that Carrillo apply to USC Kaufman, telling her about the new program.

“I’m interested in the arts in general and in philanthropy,” Carrillo said, “so it seemed like the perfect place for me. I’ve been talking to Jodie Gates about expanding Gala de Danza and creating a collaboration, a partnership with USC Kaufman so we can bring more students to perform internationally.”

This year, Carrillo helped facilitate USC Kaufman students performing their own original choreography. Jakevis Thomason (BFA ’20) brought his piece, Black Lake, to the stage in Los Cabos for this year’s Gala de Danza. Carrillo explained that the process at USC Kaufman and the dancing here is different. It’s exactly the type of versatile education she wants to be receiving.

“I wouldn’t be here if it wasn’t for the gala and for Christina Lyon’s vision,” she said.

For some, their first international performance

BFA student Zackery Torres (BFA ’21) gave a behind-the-scenes look at USC Kaufman’s trip to Los Cabos in the video above. Torres explained that for many USC Kaufman students, this performance was their first venture out of the country. For even more students, it was their first time dancing at a venue like the Viceroy. The entire performance was almost surreal for Torres. Just being in the presence of such renowned professionals and willing students inspired them to mature as an artist.

“This class is truly pushing my artistry and my technique in ways I did not think were possible,” they said. “In class, I’m so inspired by the students’ willingness to soak up what our Vice Dean [Jodie Gates] has to say about ballet. We get this every day, but watching them work so hard and look awesome is so special.”

On top of a rare performance opportunity, Torres and their fellow students also participated in photo shoots in Los Cabos. The concentration of artists at the Gala ensures a high standard for content. The students posed for Lincoln, VOGUE Mexico and more, with direction by Vice Dean Jodie Gates.

When performance hour arrived, the students gathered onstage to dance Artist in Residence Barak Marshall’s Monger and Thomason’s Black Lake. Torres said that being on the program with professionals they admire was nerve-wracking, but above all inspiring.

“They’re all so beautiful and the fact that we’re able to perform alongside them is…it takes my breath away to watch them exit the stage, and walk on next with my fellow dancers…it’s something that I can’t explain,” they said.