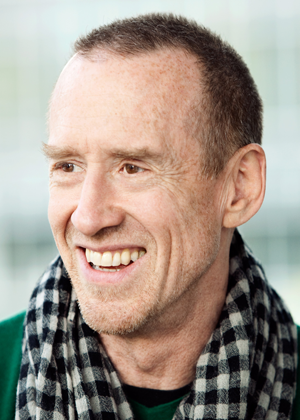 By Evan Calbi and Allison Engel

William Forsythe, who is recognized as one of the world’s foremost choreographers, will be joining the University of Southern California’s Glorya Kaufman School of Dance as a professor.

The appointment was made by USC Kaufman Dean Robert Cutietta, along with Vice Dean Jodie Gates, who is the school’s director. Forsythe will begin at USC Kaufman in fall 2015. His choreographic methods will be practiced in the improvisation and composition courses, and he will work with students from freshman through graduate levels. He will spend time teaching on campus every semester and remain involved with students, faculty and research projects when away.

Founded in 2012 with a transformational gift by philanthropist Glorya Kaufman, the school combines a conservatory environment with the academic rigor of a major private research institution. A 55,000-square-foot state-of-the-art dance complex broke ground on the University Park Campus April 23, and the first cohort of Bachelor of Fine Arts dance majors will enroll in fall 2015.

In coming years, the school plans to establish the USC Choreographic Institute, with Forsythe as its artistic advisor. He intends to do research with other USC schools such as the USC Thornton School of Music and the USC School of Cinematic Arts, and USC centers such as the Brain and Creativity Institute.

An impact on all dance majors

USC Provost and Senior Vice President for Academic Affairs Elizabeth Garrett also has asked Forsythe, who has been based in Europe for decades, to mentor the USC International Artist Fellows, a program of highly selective graduate students from around the globe who study in the university’s six arts schools.

“Bill Forsythe is a perfect match for both USC Kaufman as well as the university,” said Cutietta. “Throughout his career, he has worked closely with composers, architects, philosophers, digital animators and sport scientists. Our strengths as a university match his strengths as an artist, and we are thrilled for him to join our faculty.

“Since he will be teaching across the Kaufman School, professor Forsythe will, quite literally, have an impact on every one of our dance majors,” said Cutietta.

“For over 30 years, I have had the great fortune to work with Bill Forsythe,” said Gates. “He is one of the most important dance philosophers of our time and his choreographic work has transformed the field. He has crossed boundaries and discovered commonalities within dance, visual art, architecture and media, among many other disciplines. This type of scholarly practice and creative thinking through composition and collaboration is what our students will learn in the core curriculum at USC Kaufman.”

“I am so excited that Bill Forsythe decided to return to the United States to help the school create a new model for dance education,” said Kaufman. “He is so open to reinventing what the dancer should learn and how they should approach new ideas and concepts. Having him at USC will allow each student to be fully qualified for any avenue they wish to pursue.”

Forsythe said: “USC offers innumerable opportunities for cross-disciplinary collaboration,” and said that the potential is “significant” for USC Kaufman to make a large impact on dance in Los Angeles.

“Forsythe’s interdisciplinary work is acknowledged for reorienting the practice of ballet from classical repertoire to a dynamic 21st century art form,” said Gates. “The students at USC Kaufman will have the unique opportunity to learn from his groundbreaking choreographic practice.”

Forsythe, who began his career as a dancer with the Joffrey Ballet, first attracted international notice as the resident choreographer of the Stuttgart Ballet. He went on to create new works for ballet companies in Munich, The Hague, London, Basel, Berlin, Frankfurt am Main, Paris, New York and San Francisco. During two decades as director of Ballet Frankfurt, he created an impressive body of new works, such as Artifact (1984), Impressing the Czar (1988), Limb’s Theorem (1990), The Loss of Small Detail (a 1991 collaboration with composer Thom Willems and designer Issey Miyake), A LIE / N A(C) TION (1992), Eidos:Telos (1995), Endless House (1999), Kammer/Kammer (2000) and Decreation (2003).

In 2005, he started an independent ensemble, The Forsythe Company. That ensemble is supported by the German states of Saxony and Hesse, the cities of Dresden and Frankfurt am Main and private sponsors. The company maintains an extensive international touring schedule as the exclusive presenter of recent Forsythe works such as Three Atmospheric Studies (2005), You made me a monster (2005), Human Writes (2005), Heterotopia (2006), The Defenders (2007), Yes we can’t (2008/2010), I don’t believe in outer space (2008), The Returns (2009) and Sider (2011).

Forsythe’s earlier pieces are featured in the repertoire of virtually every major ballet company in the world.

He has been commissioned to produce on-site architectural installations with architect-artist Daniel Libeskind, and his installation and film works have been presented in many museums and exhibitions, including the Whitney Biennial, the Venice Biennale, the Louvre Museum, Folkwang Museum, Centre Pompidou, MoMA, ICA Boston and museums in Tokyo and Korea.