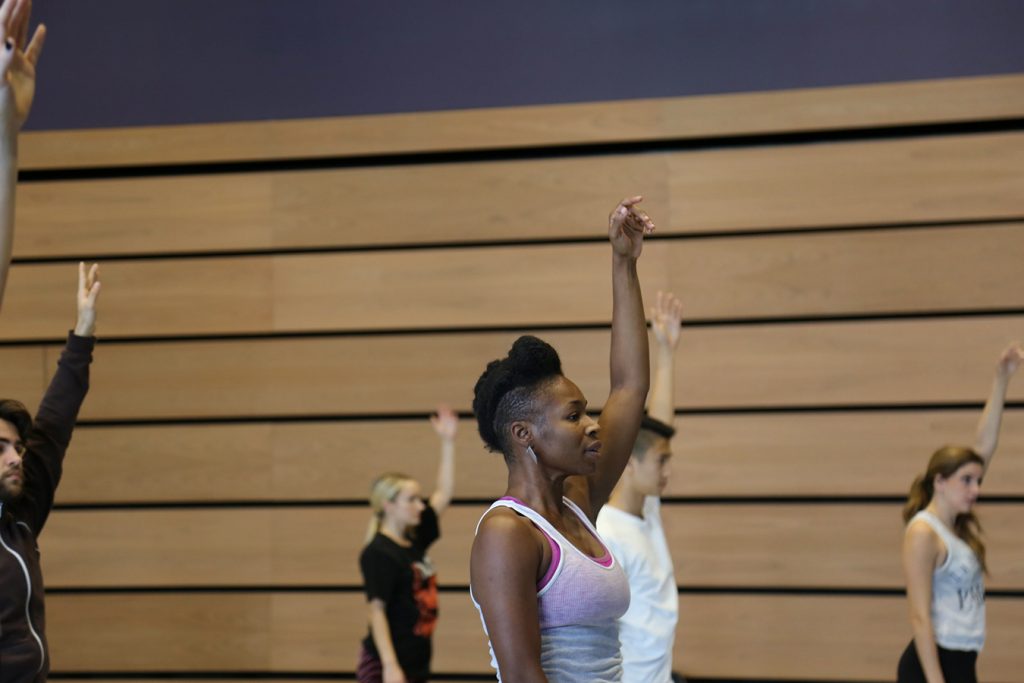 Working with Marjani was nothing short of inspiring. Her positive attitude was infectious, her willingness to listen was reassuring, and her fierce ability to craft cathartic movement phrases: juicy. Her class began with a deep relinquishing into the floor. Breathing meditations led into an X-series which became a gradual ascension to standing. We ended with a phrase, repertory from her piece, “Memoirs of a Unicorn,” and incorporated improvisational moments. Her class was a slow build into movement. It felt nice to reach large movement without a sense of urgency but rather a sense of unfolding. Her willingness to relinquish ownership over the counts of the phrase was refreshing.

“Corrections” were given in the form of augmenting the directions rather than critiquing our execution of them. We completed the phrase on our own terms with our own movement qualities, true autonomy in the choreography. She was empathetic to our bodies while remaining true to her desire to get us moving, to get us exploring. I loved the way she spoke about moving through the warm-up without adornment. Our contemporary professor, Bret Easterling, reiterates this concept often. In fact, it was nice to have Marjani’s class in the midst of a semester with Bret, because the same somatic approaches to the X-series we use weekly in his class applied nicely to her warm-up.

Marjani also came into a lecture course taught by E. Moncell Durden, “Origins of Jazz.” There, she spoke about “dignifying your lens.” To her, this meant understanding why you think the way you do–acknowledging biases you may have and addressing the roots of such bias. She stressed that perpetuating the racial, economic, and cultural stratifications that exist in our society is not required of you. In fact, reaffirming racial construct is not required at all.

This was apropos to our discussion in “Origins of Jazz,” because the continuation of racial stratifications in the entertainment industry have prevented vernacular jazz and its originators from being widely recognized. Vernacular jazz found its origins in the Afro-vernacular. Its most prominent practitioners, however–Frankie Manning, Norma Miller, Jeni LeGon–are often overlooked and rarely known by contemporary jazz students. Consequently, jazz has evolved to something remarkably far from its roots.

To have Marjani, a working professional, speak within the same discourse we engage with at USC Kaufman, was incredible. It’s exciting to know we are being primed to be critical thinkers and movers come graduation!