Choreographer Micaela Taylor and her company The TL Collective have made quite the name for themselves in recent years. Based in Los Angeles, the company has several stages to hit this summer. Taylor is using her time at the New Movement Residency this month to refine her evening-length work DRIFT after showing versions at Springboard, The Odyssey and Ford Theatres.

DRIFT has been in process for months now, entering its early stages at Springboard Danse Montreal’s Emerging Choreographers program in January. Since then, Taylor has brought the work to a few stages (including a split bill at The Odyssey with JA, a collective founded by USC Kaufman alumni Jordan Johnson and Aidan Carberry). While at USC Kaufman, Taylor continues to explore DRIFT and to find a balance between her own voice and the individuality of her dancers.

Expansion of voices in DRIFT

For Taylor, the work began as an exploration of a season of drifting she is experiencing personally. The malleable nature of its theme has allowed her to continue working on it for so long, with different bodies in different places. When she first applied for the New Movement Residency, she explained, the company had just shown DRIFT for the first time.

“At that time, it was very much about me, very personal,” she said. “It was exploring this question: how do you maintain, how do you keep being consistent and persistent when life is constantly changing around you, and you’re constantly hit with things you didn’t expect?”

Since then, DRIFT has traveled quite a bit. After their split-bill evening with JA, The TL Collective completed a residency at Ford Theatres in March. The process began to reveal a more universal aspect of the piece, Taylor said.

“It showed itself as a more cohesive work, where it’s not just about me, but everyone is finding their own connection to the story, their own voices in the work,” she said. “So people are really taking more chances in their movement, in their facial expressions, and it becomes more theatrical and cohesive.”

Taylor has found that new personalities and a mix of styles have inspired this particular process. Not only do they present new ideas, but they also facilitate playful rehearsals. Here at USC Kaufman, Taylor has double-cast the work, using BFA students and alumni among her company to introduce variation. She has each person learning a specific part. Because the work is so dense, this allows the dancers to focus their energy into one track. This way, once choreography is solidified, there’s room for manipulating and playing with the movement. 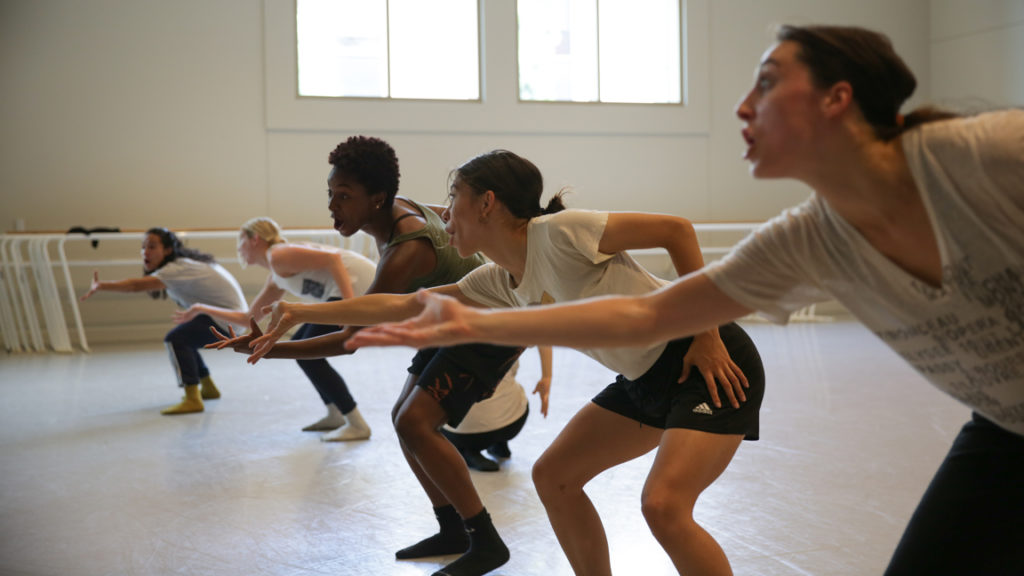 Developing her own voice

Taylor’s style is already its own category; quirky, versatile and athletic. It combines many aspects of her early training. She began as a commercial hip-hop dancer in Los Angeles, then began Vaganova ballet training at age 12.

“I had a lot of catching up to do. I felt like I didn’t quite fit in the world of classical ballet. Not just because of race, but because of the way I approach performance,” she said.

Watching Taylor perform her own choreography, it’s obvious what she means. Her facial expressions are bold and animated. She dances low to the floor and is unashamed to show the effort behind the movement. Consequently, she took that training and brought it elsewhere: to her own choreography.

“You see that mix in my work. You see the lines, the shapes, the turns and the technique but you also see hip-hop, isolations and groove,” she explained.

Taylor admires the work of Crystal Pite and Hofesh Schechter, choreographers who use production to heavily supplement theatrical work. She is interested in the way they tell stories—so much so that her research includes watching a lot of their one-minute clips and trailers online. The cinematic element is evident in her own work. Though there may not be a step-by-step narrative, motivations and expressions are clear in the dancers’ communication.

After the New Movement Residency, Taylor will bring DRIFT to Jacob’s Pillow’s Inside/Out stage. Then, she’ll travel and teach parts of DRIFT, workshopping the movement in different spaces. Eventually, she hopes to bring the work back with everything she has gathered this year.