USC Kaufman faculty member d. Sabela Grimes lends an ear for music and eye for dance to his latest collaboration with CONTRA-TIEMPO 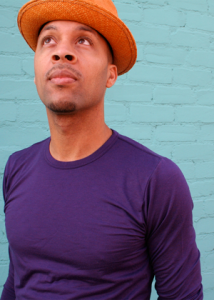 USC Kaufman faculty member d. Sabela Grimes is one of the creative forces behind “Agua Furiosa,” the newest work of Los Angeles-based dance company, CONTRA-TIEMPO. Grimes crafted both the soundscape and script for the evening-length piece that was inspired by Shakespeare’s the “Tempest” and tales of the Afro-Cuban goddess Oya.

“Agua Furiosa” started with a series of collaborative choreographic laboratories in which Grimes contributed as a composer and sound designer. The music, a mix of traditional instruments, media sound bites and a sonic score, was developed in step with the dance rehearsal process.

As a choreographer and composer, Grimes has the ability to understand what for many are two different languages – music and movement.

In many ways, Grimes’ interdisciplinary work with CONTRA-TIEMPO mirrors his pedagogical approach at USC Kaufman. As a professor of Hip-Hop, Dance History and Improvisation, he emphasizes the close union of dance and music in Afro-Diasporic cultural practices.