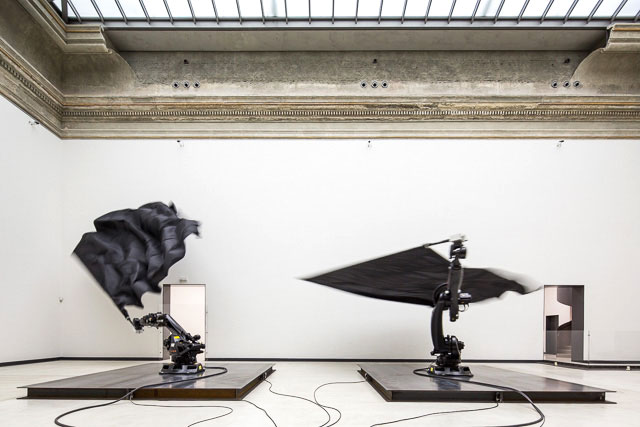 William Forsythe has made a career out of subverting and contesting what we accept as “art.”

The acclaimed dancer and choreographer will be joining the faculty of the USC Glorya Kaufman School of Dance starting next fall, after three decades spent in Europe, overseeing the Forsythe Company in Germany and producing some of the most innovative and avant-garde work in contemporary performance.

In his recent work, “Black Flags,” Forsythe invites the viewer to engage with two hulking, mechanized robot arms, as they perform a synchronized flag-waving routine in a museum space. The experience, as Forsyth describes it, is “viscerally intimidating, yet mesmerizing, creepy and wonderful.”

Beginning in 1993 with a piece choreographed by Forsythe and performed by David Kern, the concept of “Black Flags” sprung from some “very complicated choreography” involving Kern, a long carbon fishing pole and an attached black ribbon

“I was under the impression that we could somehow record what David was doing and then have a machine reproduce it,” Forsythe explained.

Since the 1990s, Forsythe has explored the boundaries of performative space in a series of art works and installations he’s titled “Choreographic Objects.”

The complexity of Forsythe’s “Objects” are often at odds with their apparent simplicity — thousands of white balloons; a jumbled mass of mirrors and chrome; and a gallery crisscrossed by moving pendulums gingerly negotiated by a solo dancer.

His installations seek to remind us of the powerful kinetic forces that shape our everyday lives, often in unexpected ways.

Forsythe has presented his installation and film works at the Museum of Modern Art in New York City, the Louvre Museum in Paris and London’s Hayward Gallery, among other venues.

For “Black Flags,” Forsythe and his team drew inspiration from the ubiquitous, crowd-rousing flags spotted at football games and were initially surprised by their cumbersome, “massively heavy” dimensions.   From there, the idea of using arm-like robotic machines was born.

“It was an interesting process trying to introduce Sven [Thöne], the programmer, to all these ideas of abstract narration, or how abstract movements actually form a kind of narration,” Forsythe said.

“For some reason, the flow of air did not have the same properties in the smaller room as it did here,” explained Forsythe, referring to the much larger installation space that the piece now occupies.

Forsythe, who established his eponymous company after the closure of the Ballet Frankfurt in 2004, is widely known for his collaborations with artistic and educational innovators and is regularly invited to lecture at universities and cultural institutions around the world.

While Thöne and Forsythe may have fundamentally differing areas of expertise, their combined efforts sparked a symbiotic creative relationship.

“We managed to find all sort of emotional dynamics through the speeds that were available for the flags,” Forsythe said.

The final product, which was on display from November until mid-January of this year, was nothing short of a radical reconceptualization of what can be considered modern-day choreography.

“What turned out very nicely is that we ended up focusing more on the air acting upon the flags, as opposed to the robots,” Forsythe said. “It’s almost as if there’s a third actor — there’s the robot, the flag and the air.”