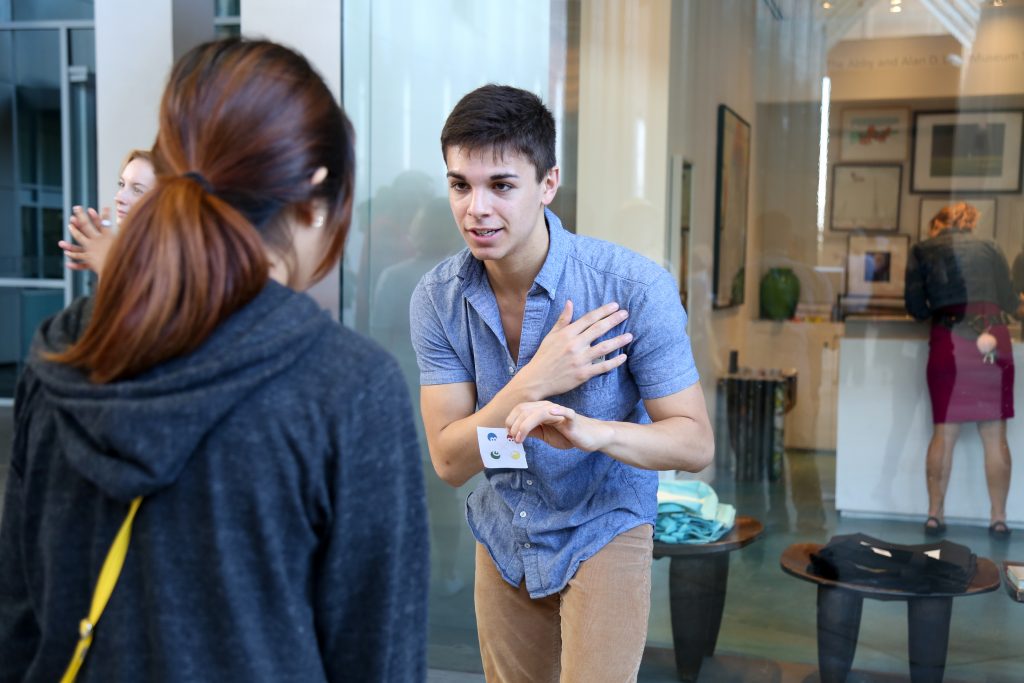 Staged at different spaces within the museum, the works generated new dialogues between visitors, dancers and the museum itself. Stellentstellen (2016), interpreted by dancers Rauf “Rubberlegz” Yasit and Riley Watts, allowed the audience to circulate freely around the performance in the absence of a stage. Meanwhile, USC Kaufman BFA students executed Acquisition (2016), giving visitors the chance to engage actively in an exercise that took them out of their physical and mental comfort zones. 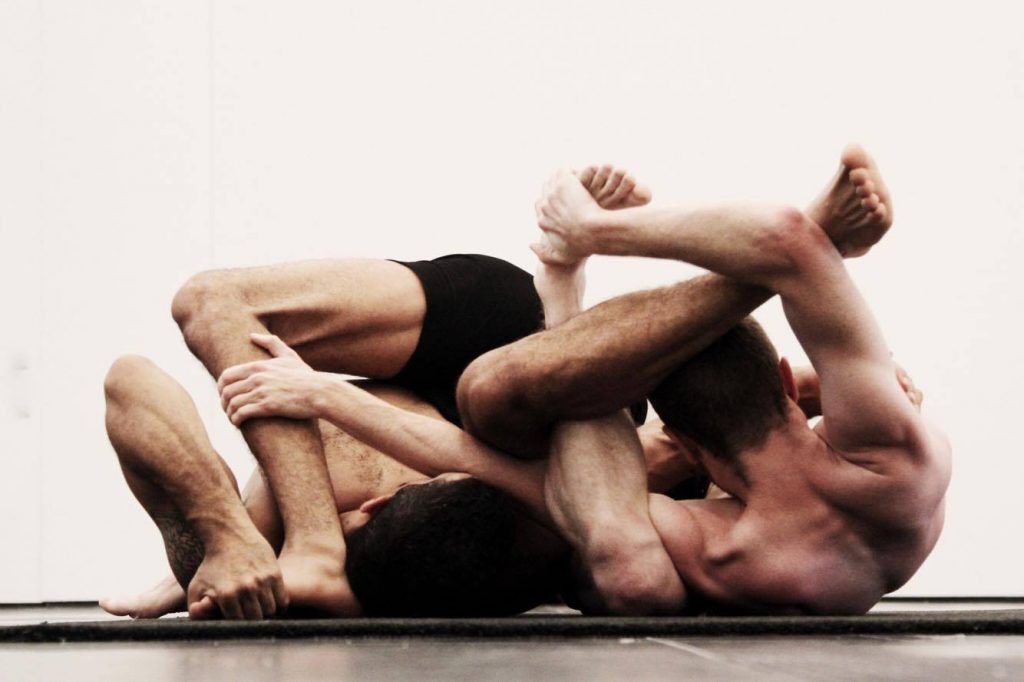 The piece, which required strong interdependence between the two dancers’ bodies, made clear that every movement required deep knowledge of the other’s physicality and strength.

“I don’t think it would be possible for me to perform the piece with a different partner at this point,” said Yasit, who had previously collaborated with Watts in Alignigung, a film version of the same piece. “Before seeing us work together, and without even knowing me personally, Forsythe already knew that we would get along.”

During the performance, the dancers’ skin often revealed the impressions left by the other’s body. Yasit and Watts spent long hours in rehearsal and in dialogue to achieve this level of coordination.

“We went through a long process of interviewing each other’s bodies for this work,” said Yasit. “If we didn’t agree in each movement, we could end up in a total node, difficult to detangle.”

“The concept of the node has been developed for many years in Forsythe’s work but I’ve only performed it on stage with a still audience,” Watts said before the performance. “I’m excited to perform it in this space, where the audience has the ability to walk in and out. That has the potential to affect the choreography in ways that you can’t experience while performing in theater spaces.”

Within the silent space, visitors viewed the slow transformation of the two-body shape as it evolved. While the dancers contoured, visitors tried to detangle the figures with their eyes to understand how each dancer’s limbs and body related to the other’s.

“The performance made me think about the private movements of the human body but without the sexual connotations,” said museum-goer Felipe Duran, a composer from Colombia. “It surprised me. When I first saw it, I just thought of an exploration of space and movement, but the word dance didn’t come straight to my mind.” 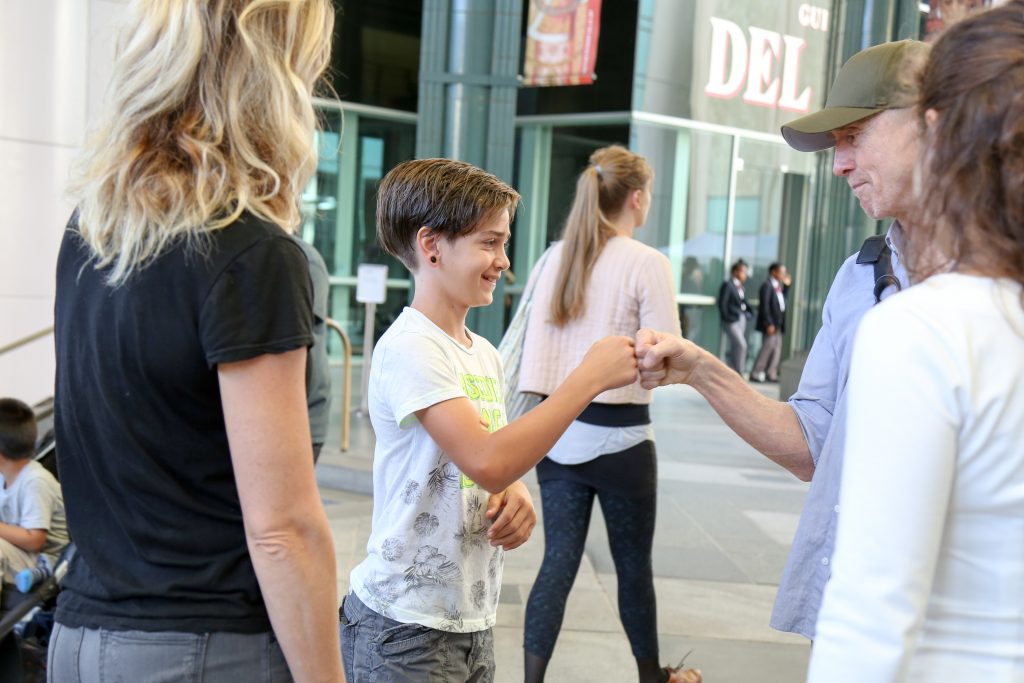 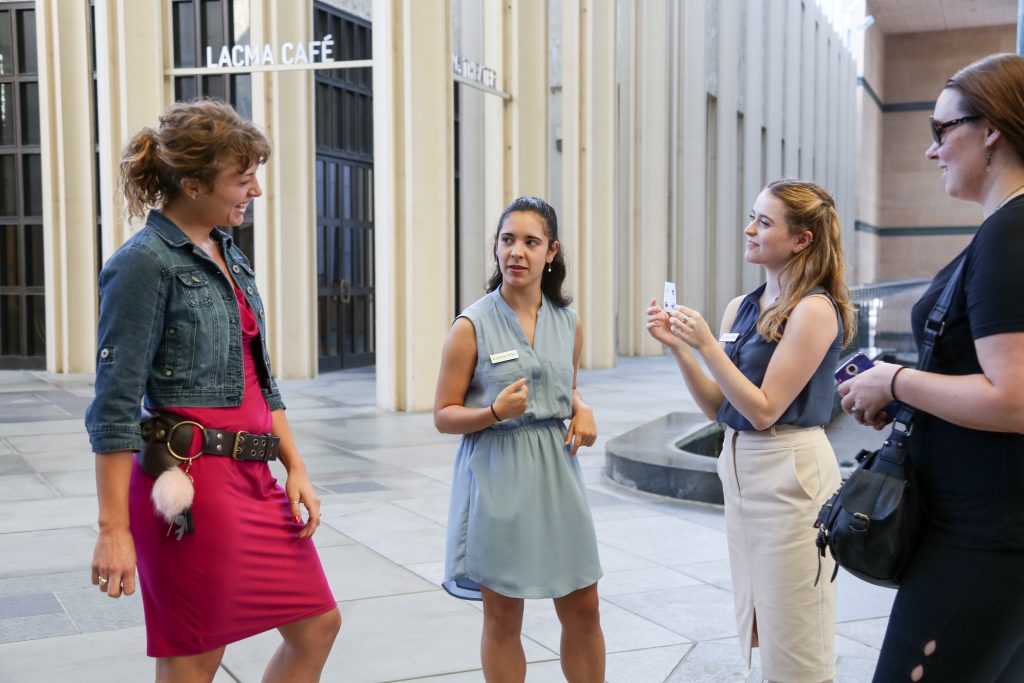 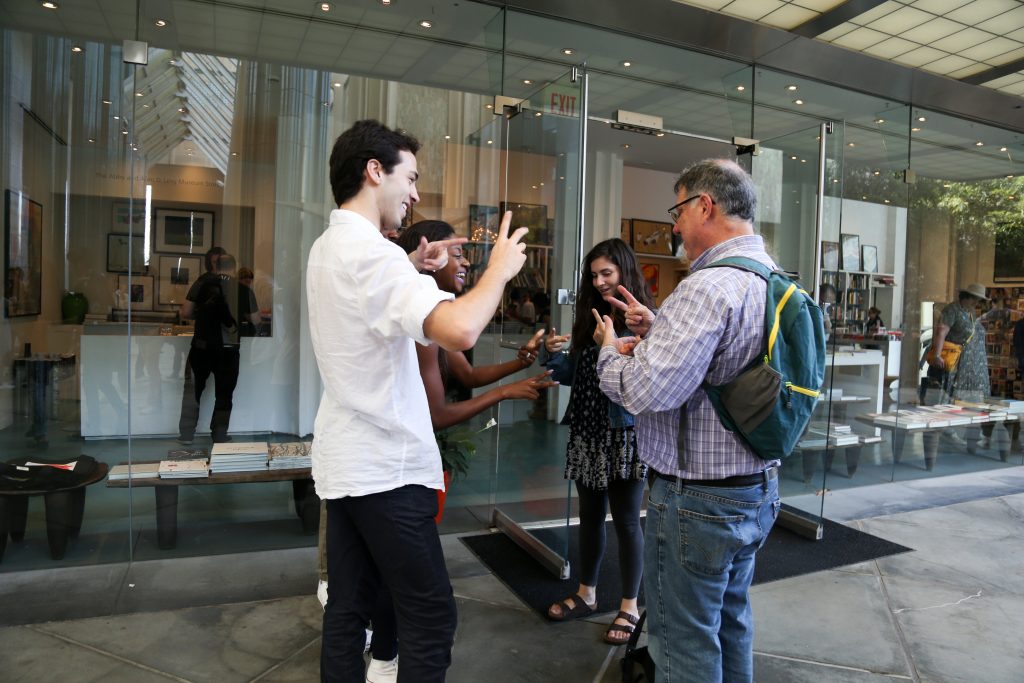 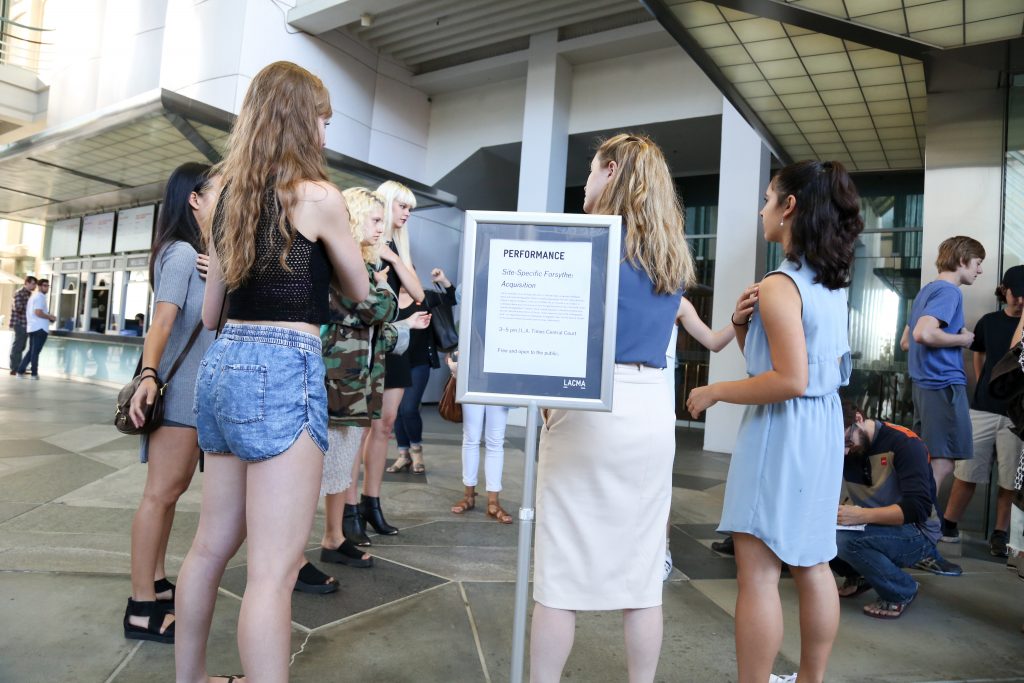 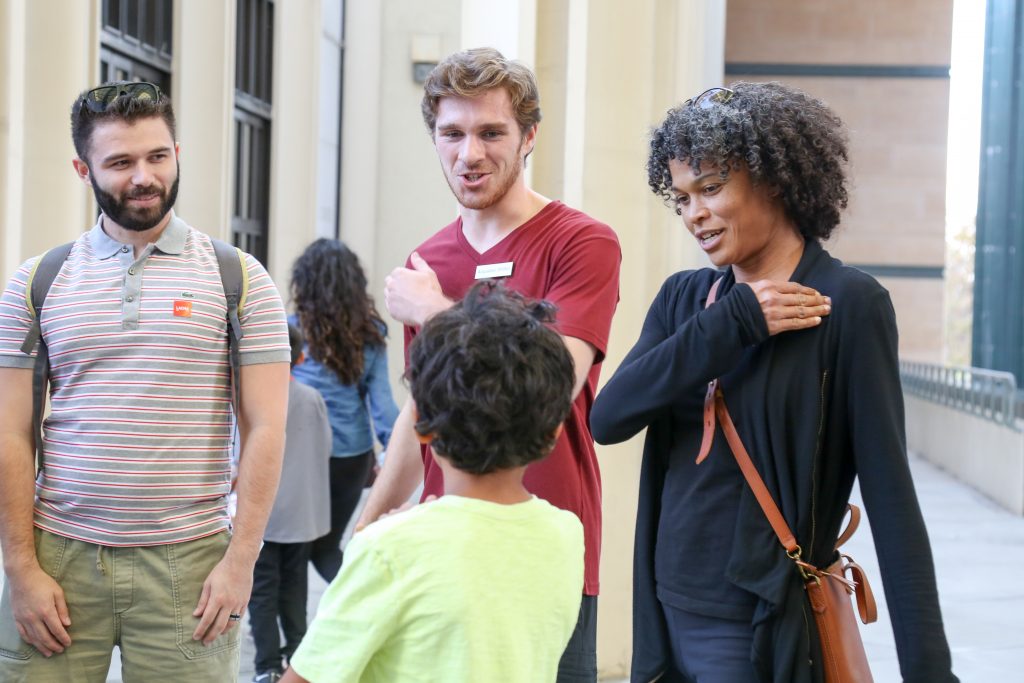 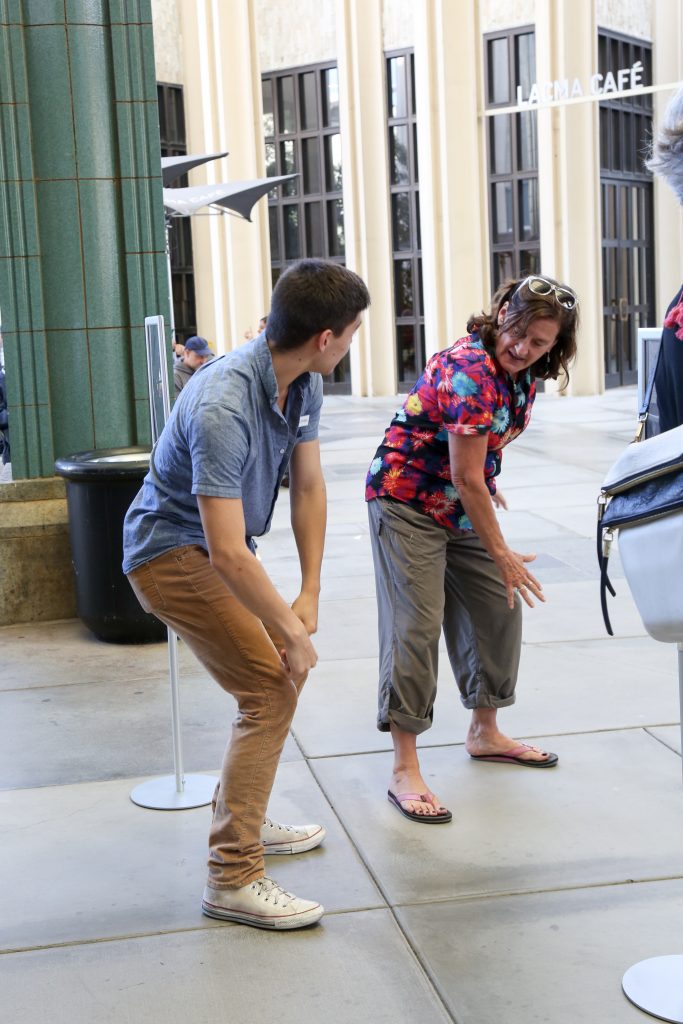 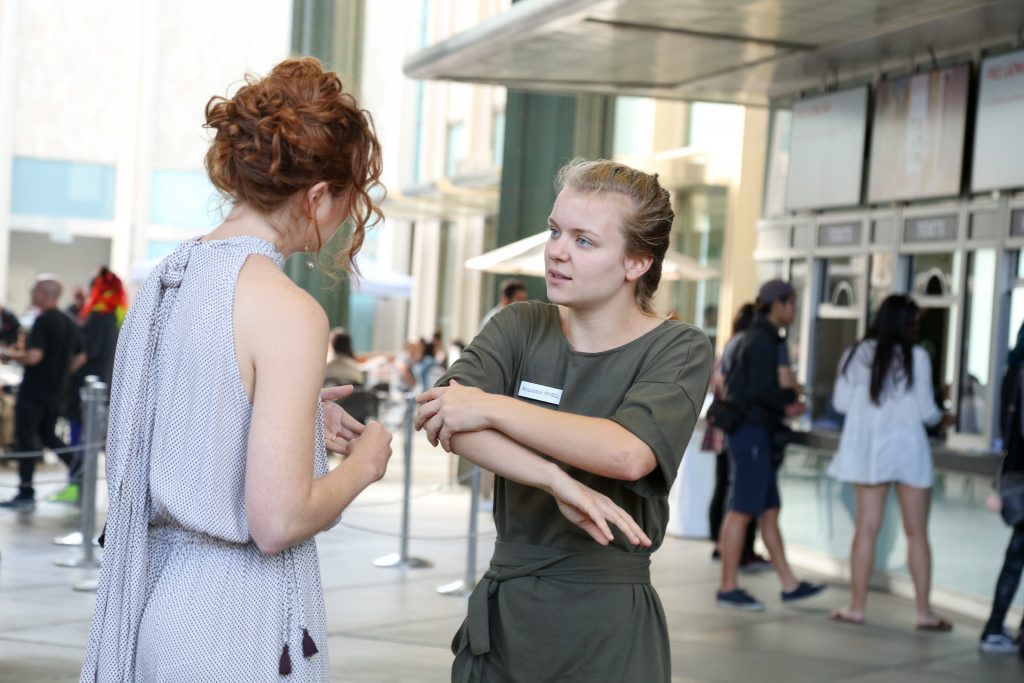 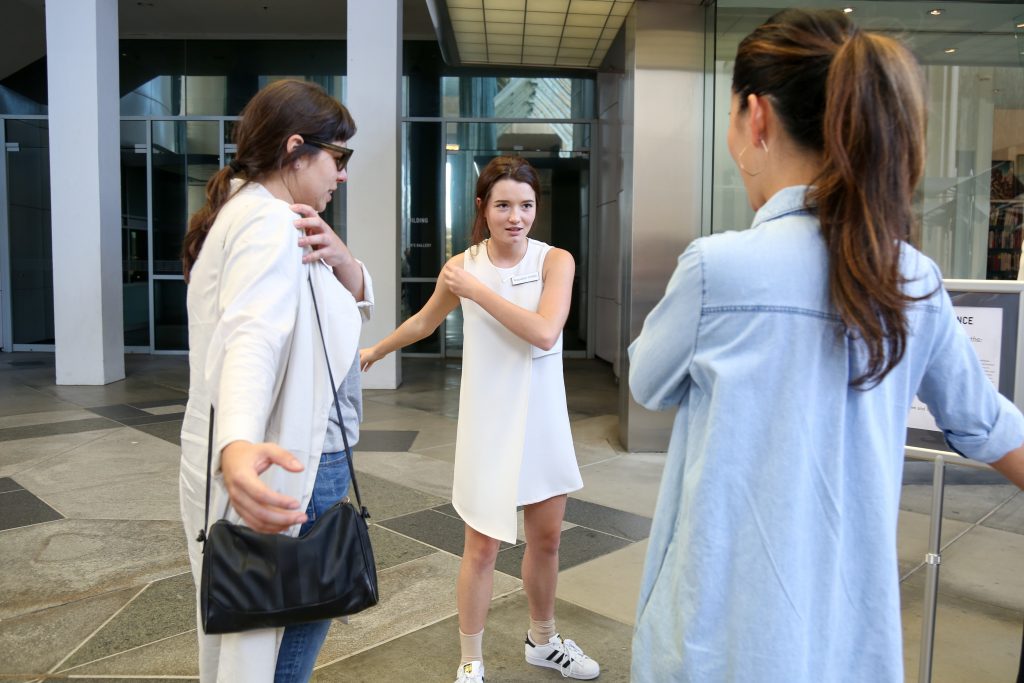 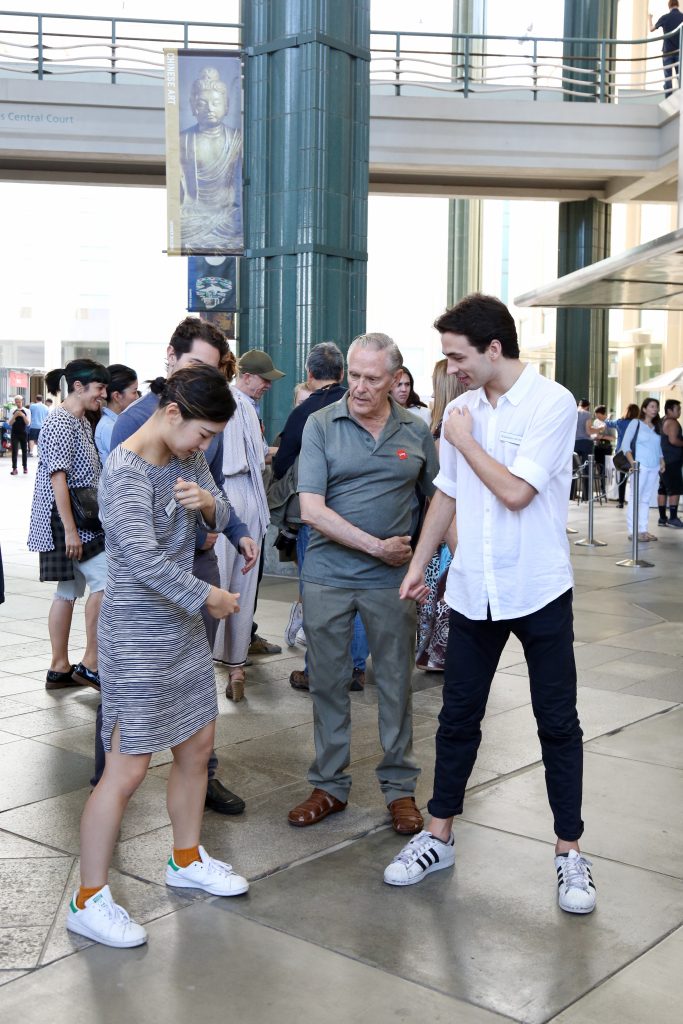 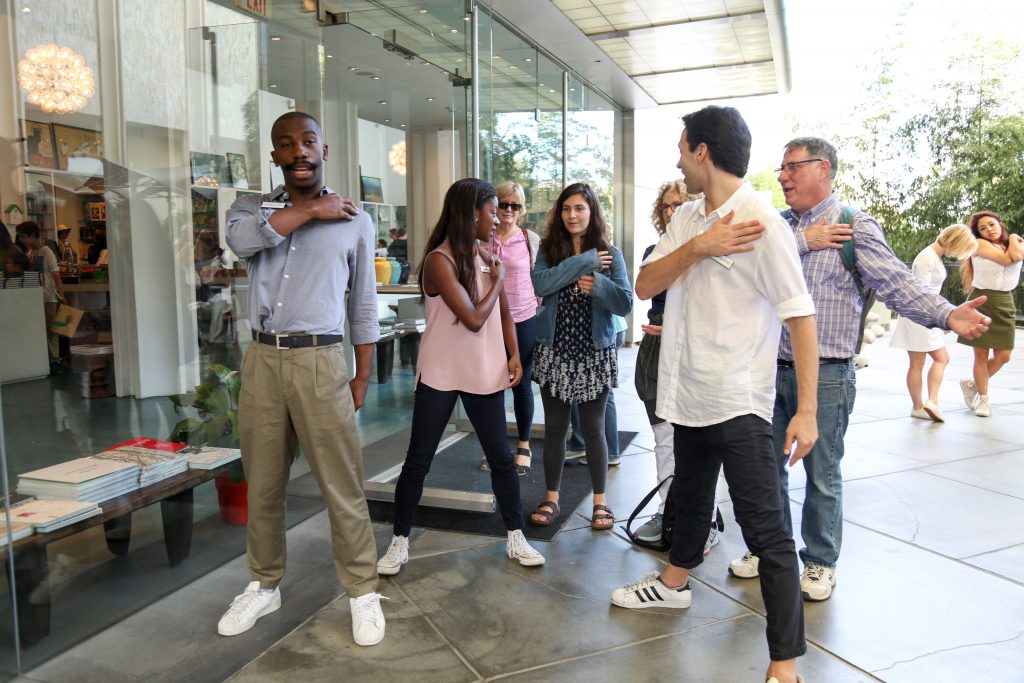 By guiding the visitors through the sequence instead of performing it, the students made the spectators the core element of Forsythe’s Acquisition.

“It is really interesting to do this at a museum setting, where people usually come to watch art,” said BFA sophomore Austyn Rich. “They tend to want the work already done and not necessarily see the process behind it. We made them part of the process.”

With endless possible versions of complexity, such as adding mathematics to the sequence or musical notes to the enunciation of each step, the practice of Acquisition leads to the strengthening of neurological connections within the brain.

“The point of it is maintaining a mental image as well as a physical pattern with your hands,” said BFA student Jessica Muszynski. “It’s a puzzle of simultaneous actions. Two of them are mental and verbal. Another one is physical.”

The students helped visitors as they struggled to perform the actions of Acquisition, acknowledging that the exercise was not about the expertise but about the process of acquiring it.

“I didn’t understand it at first, so they led me to the different ways in which the combination could fit me,” said Caleb Mitchell who, although being a professional ballet dancer, was surprised by the challenge of the task. “Little did I know, the students eventually told me that it took them six months to learn.”

Visitor and modern dancer Emily Wanserski also expressed her curiosity about the exercise. “I found it very hard. It removes every other aspect of dance and focuses on logic,” she said. “Without any directives on quality of movement, speed or posture, it really took me down to the core data of dance. I’m gonna keep practicing it.”

Stellentstellen and Acquisition were presented by LACMA as part of Fall for Forsythe, the month-long celebration of the work of renowned choreographer and USC Kaufman faculty member William Forsythe.