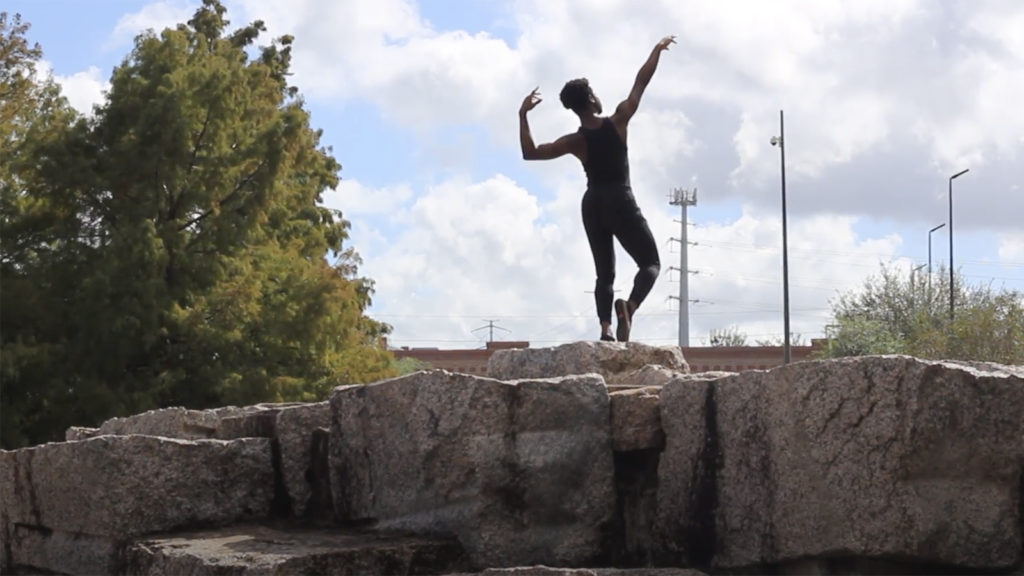 The BFA in Musical Theatre from the University of Southern California offers students opportunities for interdisciplinary collaboration and creativity. By blending the resources of the USC School of Dramatic Arts, the USC Thornton School of Music and the USC Glorya Kaufman School of Dance, the degree provides unparalleled training for the stage, screen and beyond.

The Class of 2023 began in the fall of 2019 as the inaugural class. Now in their sophomore year, USC Kaufman lecturer Kate Dunn tasked the cohort with a semester-long project that hinged on their dance training. The assignment was to create a short film by taking the lyrics and story of a musical theatre song and to share the song’s narrative through dance.

Each student was encouraged to choose a song that resonated with them as individuals at this stage in their musical theatre training. Sophomore Dylan Smith picked “Summertime” from the musical Porgy and Bess.

“For me, I had to find a song that I really connected to or that I couldn’t escape the ear worm that was stuck in my head,” he said. “From there, I wanted to tell the story of what the song is really saying as a musical theatre piece and what was being vocalized.”

Smith’s classmate, sophomore Munachimso Mbaezue, was similarly struck by his song choice. He chose “A Brand New Day” from The Wiz for its pep as well as its greater lyrical importance.

“The song talks about freedom and emancipation as a part of The Wiz, which was an all Black cast and retelling of The Wizard of Oz,” Mbaezue said. “They sing that right after defeating Evilene, who is the Wicked Witch of The Wiz storyline.”

For sophomore Shaheen Kapambwe, the musical Guys and Dolls inspired her choice of “Luck Be a Lady.” Kapambwe explained that she used the jazzy 1950s rhythm to turn the stereotype of the song upside down and show the female perspective.

“When you see this song on stage, it’s all men and they’re gamblers wearing suits. There are very strict gender role connotations,” she said. “I wanted to play around with what it would be like to dance the song from the perspective of Lady Luck. She isn’t the typical 1950s kind of woman. She’s fun and plays by her own rules. I thought that was such an interesting character to look at.” 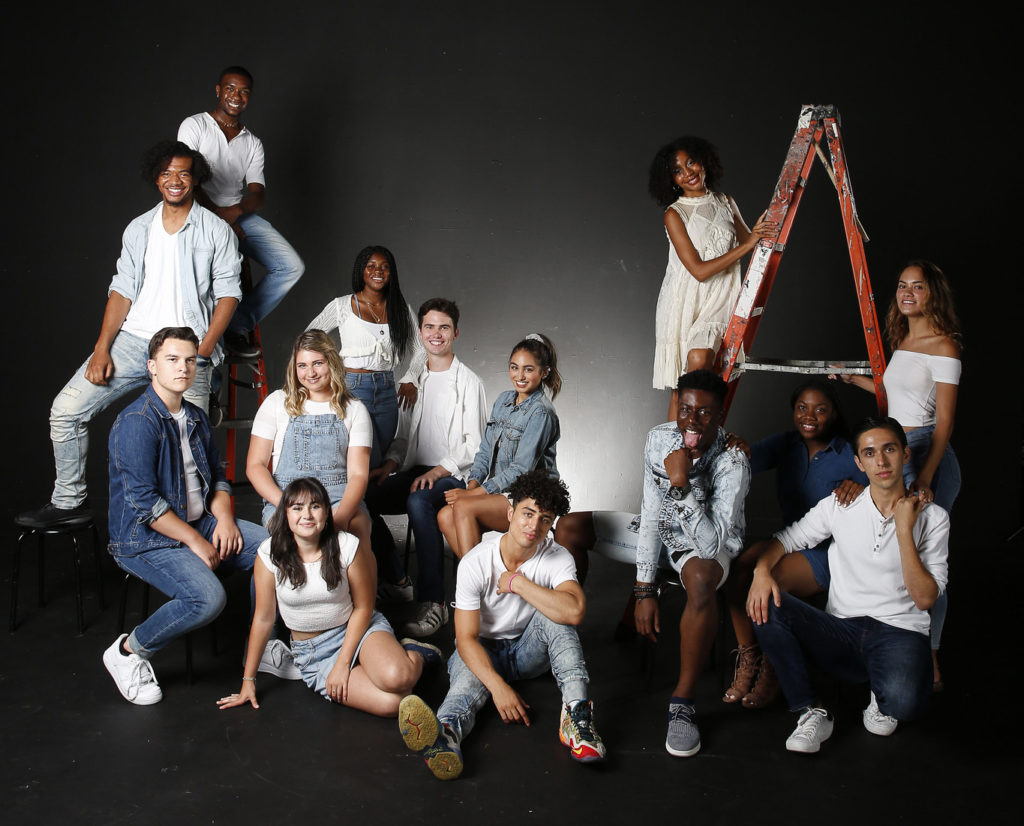 For sophomore Brandon Borkowsky, his choice of “Steppin’ to the Bad Side” from Dreamgirls was about taking matters into his own hands. The character Curtis from the musical inspired this decision. Borkowsky explained that the project seemed especially tough because of this semester’s virtual class setting, but he eventually found his vision through trial and error.

Borkowsky said that he found his style while filming the piece because the process’s spontaneity. He explained that his friend helped with filming, and he used their apartment building as a filming location.

“My friend’s building had this staircase, and it was a perfect space for dance. So, she was trying to film, but she wasn’t really getting the right angles,” Borkowsky said. “Then, her dad opened the door to check on us, and he took the phone camera and started getting low and high angles. That expanded my perception of how to approach my project.”

One of the main hiccups the students faced during the project was the act of filming. Whether it was staying safe in regards to COVID-19 regulations or filming before the sun set at 4:30 p.m., the students had to think creatively to achieve their project goals. For Smith, he found it particularly difficult to imagine the finished product on screen and not on stage. He explained that this shift in mindset helped him better understand the role of the audience for his project.

“Usually when I choreograph I imagine things on stage,” Smith said. “Filming was a very good learning experience to show how to display things on screen. Since the eye is the window to the soul, I believe that the camera is the entrance way into the audience’s soul. So, I really honed in on what can be seen and not seen in my video.” 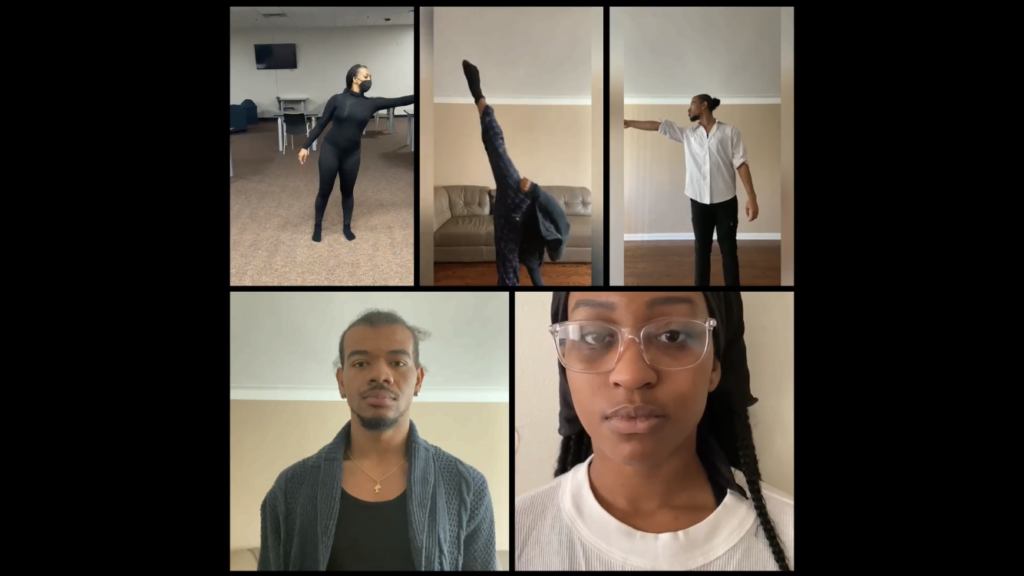 Throughout the semester, the sophomore class worked with choreographers, Tony Award-winner Peter Darling (Billy Elliot: The Musical and Matilda: The Musical) and Artistic Director Jacob Jonas (Jacob Jonas The Company), to perfect their projects. The students concluded that while Darling taught more big-picture thinking, Jonas focused on breaking down the elements of the video. Both Borkowsky and Kapambwe noted that Darling’s advice to compile simple verbs to inspire choreography helped their creative processes.

“Darling told us to list different adjectives that define your character and from those words then list different verbs that relate to those adjectives. My words were slither like a snake because my character was snaking people,” Borkowsky said. “We took these very non-dance verbs and had those actions be the basis for our movement choices. This helped me because a lot of the time the hardest part is that you don’t know where to start.”

USC Kaufman Assistant Professor of Practice Dawn Stoppiello, who teaches Dance and New Media, also spoke with the musical theatre majors. Stoppiello, a Bessie and Princess Grace Statue Award winner, is the co-founder of Troika Ranch, a critically acclaimed performance ensemble that has been integrating computer technology in live performance since the 1980s.

The assignment earned praise from the Class of 2023 as an active project during the completely virtual semester. According to the students, they appreciated the opportunity to stretch their creative legs outside of Zoom as well as show what they are capable of.

“I’m super grateful that we did this project, especially over quarantine because it was so good to exercise creative muscles,” Kapambwe said. “It can be so hard just doing battements, singing at your voice lessons and going to your acting classes through Zoom, but to be able to step away from the computer and work and create has been such a good opportunity and I’m excited to make more content.”

To learn more about the BFA in Musical Theatre, please visit the USC School of Dramatic Arts’ website.