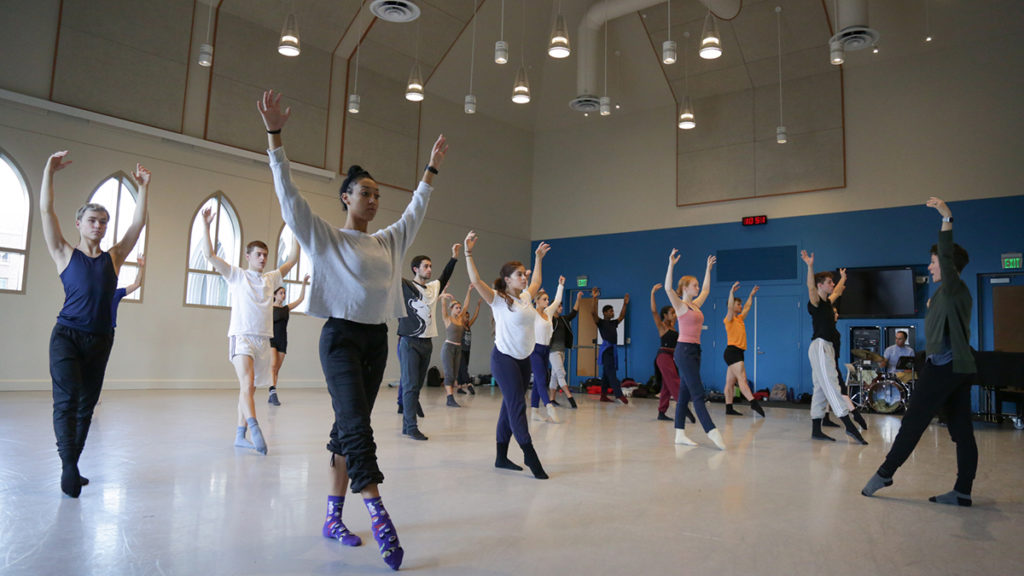 USC Glorya Kaufman School of Dance faculty member Jennifer McQuiston Lott is a leader in interdepartmental collaboration at USC. At this year’s USC Faculty Symposium, Lott, along with one of her collaborators—Professor Andrew Norman from the USC Thornton School of Music— were invited to discuss their Spring 2018 USC Visions and Voices event, “Caught in the Chamber.”

Presented with Brooklyn-based chamber ensemble yMusic, “Caught in the Chamber” showcased a collaboration between the professors’ schools. Going forward, promoting interdepartmental works such as this will be a priority for the USC’s new president, Carol L. Folt.

This December, Lott, Norman and yMusic are teaming up again—now with the addition of USC Kaufman faculty member Dawn Stoppiello. Together, they will showcase an expansion upon their 2018 work. The new event, “Activated Chambers,” will include interactive, installation-style performances taking place throughout the Glorya Kaufman International Dance Center.

“My colleague Jennifer Lott told me she was proposing to do a second collaboration for Visions and Voices. I had the idea of doing a site-specific kind of performance in the USC Kaufman lobby for a while and thought there might be a way to combine the two ideas. So, we did,” said Stoppiello.

For Lott, this take on the event aligns with her ideas for USC Kaufman’s role on campus.

“As a school, we seek not only to expand opportunities for our students, but to expand how the rest of the university sees and thinks about dance,” she said. “We want to showcase how dancers and choreographers spend their days steeped in collaborative thinking and problem-solving towards a common goal— in this case, a multi-tiered performance event.”

Over the years, Lott has danced professionally with a variety of companies, choreographed for the stage and screen, and even co-founded the Traverse City Dance Project— a seasonal company for professional dance artists in Traverse City, Michigan.

Within this variety of work, collaboration has been a through-line.

“I’ve spent my career working with musicians and composers and filmmakers. The music I use is almost always a product of a relationship I’ve cultivated, same with the films I’ve made,” Lott said. “I don’t have a one-size-fits-all prescription for getting started, I just build the team and we start together. And then it’s all about culture. That part is really important. I find everyone does their best work— takes the most creative risks– when the vibe is rigorous but generous, humble, positive and focused on a common goal.”

In this respect, Lott’s collaborative pursuits at USC are a natural progression.

A unique aspect of Lott’s Visions and Voices series is the addition of artists from both inside and outside of the USC community. In both “Caught in the Chamber” and “Activated Chambers,” chamber ensemble yMusic’s involvement has been a central aspect of the process.

“As for yMusic’s involvement, Professor Norman and I are inspired by them not only as exceptional artists, but also as innovators,” Lott said. “They are known for blurring the lines between chamber, experimental and pop music. They’re also at the forefront of educating and cultivating new audiences. We love that our students get to work with them on new creations.”

Lott also spoke to the similarities in her collaborators’ work, and how they are all able to come together on this project.

“Professors Stoppiello, Norman and yMusic are also constantly involved in collaborative creations, whether it’s an opera, a music video or a multi-media performance with live, original music. It’s how our art forms work; it’s quite miraculous that it works, but it really does. These are skills that we hone over time,” she said.

“Activated Chambers” is also giving USC Kaufman students the opportunity to showcase their work. Camryn Pearson (BFA ’21) was one of six students Lott asked to create a piece for this event. Pearson will present “Desolate,” which he has worked on since October in collaboration with a USC Thornton student.

“My favorite part of this process was the first conversation I had with my composer, Luca Mendoza,” said Pearson. “When we first spoke, we coincidentally already had similar themes and ideas for the piece in mind. We seemed to mesh well together for this specific project. Speaking with Luca made me even more motivated to get into the studio and create than I was before.”

Pearson’s relationship with Lott has also been important in shaping his contribution to “Activated Chambers.”

“Professor Lott has influenced the way I judge myself as a choreographer,” he said. “I tend to be my own worst critic, as most artists do, but Professor Lott has helped me to be more forgiving of myself within my creative processes.”

Faculty on collaborating with students

For the USC Kaufman faculty involved, this event poses the opportunity to work with students like Pearson in a new setting.

“I’ve had some great opportunities to work with our students, both in and out of classroom. They are fierce movers and thinkers and a delight to work with. They bring their whole selves to the table,” Lott said. “As an artist in the field, I find that USC Kaufman students are some of the best collaborators; they are some of the first people I’d choose to hire. That’s a real tribute to the work we all do together in this building.”

“The students involved are all curious, risk-taking, budding experimental makers. I am so excited to give them an opportunity to express themselves outside of the prescribed constructs of the Kaufman curriculum,” she said.

In the final weeks leading up to the event, Lott shared her overall thoughts on the process of bringing “Activated Chambers” together.

“We make extremely well-laid plans, and then we have to remain flexible as we follow through to the end goal. Stuff comes up and people miss deadlines for very good reasons. An element we dreamed of becomes impossible to pull off. Life happens,” she said. “I live for collaborations like these, in part because I always learn so much from my colleagues and collaborators through that flexible, conversational, and yes, often stressful process.”