Playing in the SandBox: a senior project by Justin Epstein and Noah Guthier 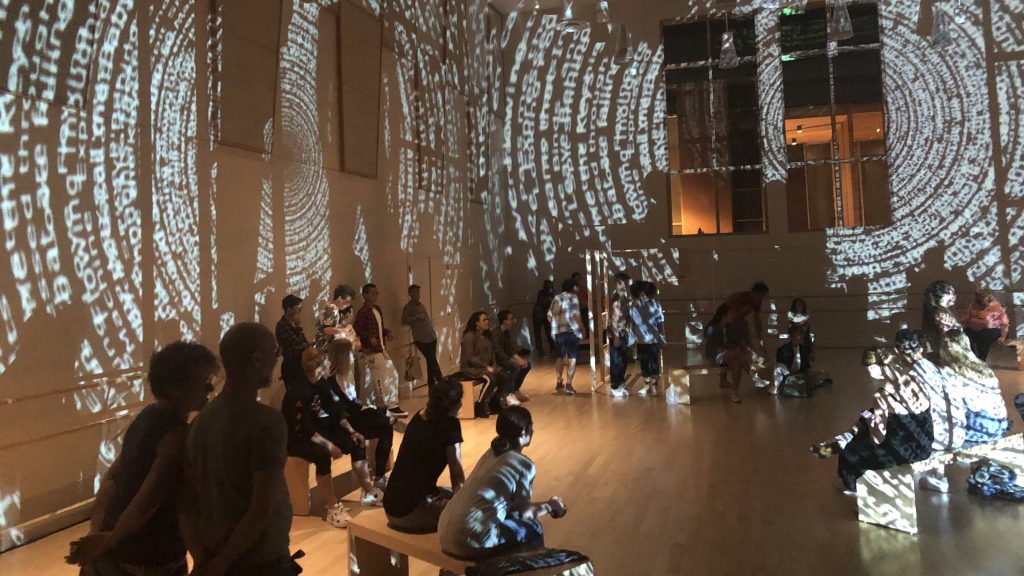 When dance major Justin Epstein (BFA ’19) pitched his senior project late last year, he had big aspirations. Epstein wanted to create a live interactive experience, with music, projections and dance. All would be manipulated spontaneously throughout the evening. Of course, he only had a few months to put it all together, while still maintaining a full course load. This would be quite the task. Fortunately, his colleague Noah Guthier (BFA ’19) found him after class.

Guthier’s idea to combine projects came at just the right time. Epstein had begun to plan his process and realized just how much work was cut out for him.

“Even in the preliminary stages of planning I had become so overwhelmed,” Epstein said. “It was a blessing to collaborate with Noah in terms of workload, but also in terms of his incredibly creative mind. We were able to bounce ideas off of each other and ultimately create a show that was greater than what we could have done by ourselves.”

“Rehearsal was a play space for exploration, and then Noah workshopping movement ideas with the dancers, me included, and just kind of playing for about four and a half months. About three weeks before the show, we started to nail down the structure,” Epstein explained.

The show was based heavily around a philosophy of play—spontaneous, joyful. While the dreamers were hard at work in the studio, Epstein was also working on the score. He happened to sample an audio clip from a TED Talk about play, which resonated strongly with Guthier. They centered the concept in a sandbox, which would stand as a more tangible representation of play itself.

“We wanted to give the dancers the power to play at an extreme level, with exploration and curiosity,” Epstein said. “We gave them several things to respond to: the set, the projections, the music and then even the audience.”

Underneath this concept of play, Guthier developed a much more nuanced set of principles that built his intentions in creation. Among them: decentralization of power, realization of individual creative thought, and the ability to hold and create whatever you want within your hands (just as you would sand in a sandbox). 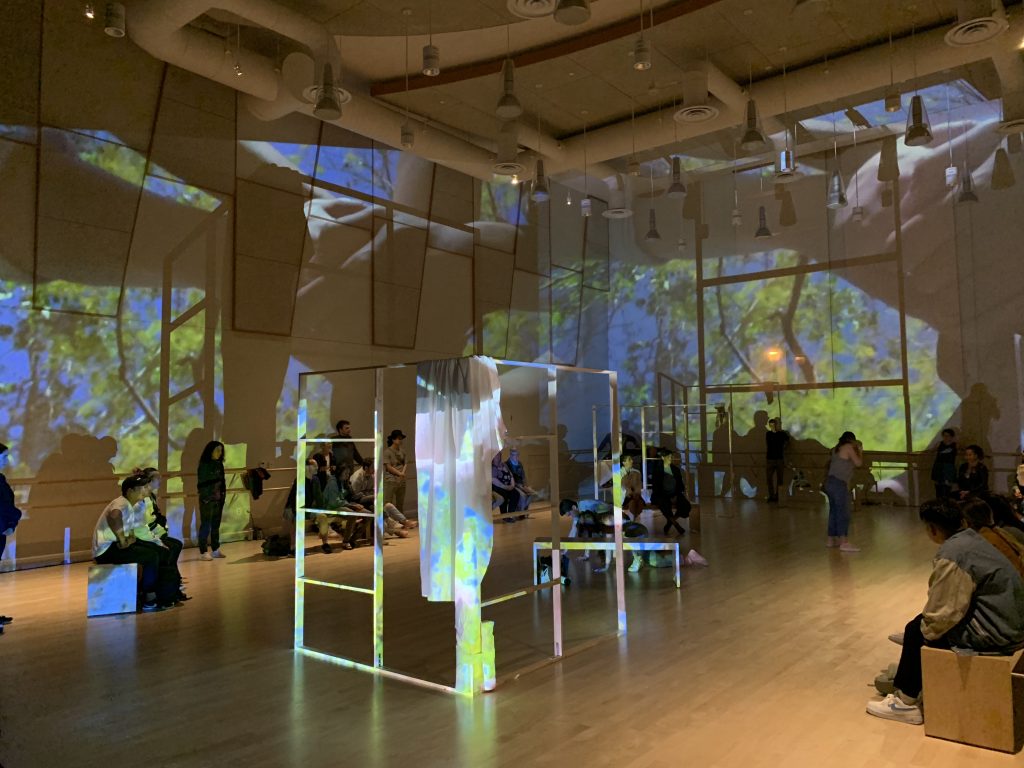 Guthier also used secondary video installations that would interact with audience members as they moved throughout the sandbox. These simultaneously reinforced the concept of play and involved the audience members directly. Along with the installations, projections covered all four walls. Both were made with Troikatronix’s Isadora software, which Guthier learned from faculty member Dawn Stoppiello. He spent countless hours exploring the software to its furthest ends before scaling down to create the projections for SandBox.

“It had to go to my limits to see what was possible first. From there I felt comfortable picking and choosing what I wanted, as opposed to it just being a product of my limitations,” he explained.

A sound station was set up in the corner, where dreamers shared their own opinions on the process. This station in particular reflected the decentralization of power, with dancers giving input rather than an omnipotent choreographer. Finally, Guthier built physical sets himself, crafted from wood to resemble the structure of a sandbox and give way to openings for play. Dreamers peeked through and ran around, engaging audience members in their play to open up more possibilities.

With such an elaborate setup, the two creators learned the physical production side of multidisciplinary work as well.

“We joked that we spent more time wrapping cords than we did actually working on the piece,” Guthier laughed.

Together, however, the pair involved several disciplines in a thesis project for a dance university, all the while using dance to unite all mediums.

When Epstein wasn’t dancing with the dreamers, he was manipulating the score he had built. Through Ableton, a program he learned by taking music production courses at the USC Thornton School of Music, he had structured each track appropriately and could then add layers as he saw fit. This way, the music could accompany the dreamers each night in a slightly different way—facilitating their play as much as possible.

Now, with a complete environment, they set out to defy all the structures they had put in place.

The pair’s vision for the piece and its capacity for audience involvement meant that their structure had to be loose. This would help accommodate space for interaction and spontaneity.

“Once we had narrowed down the score and the movement ideas, we really just broke everything,” Epstein said. “The week before, we disrupted structure, focus, intention, and allowed the dancers to be autonomous.”

A complete transformation of the Sapphire studio at the Glorya Kaufman International Dance Center created a place for audience members to become immersed. The sandbox was unpredictable, a celebration of play and community. Together, Guthier and Epstein translated daunting ambitions into their own complete work, a true culmination of their research and training at USC Kaufman.